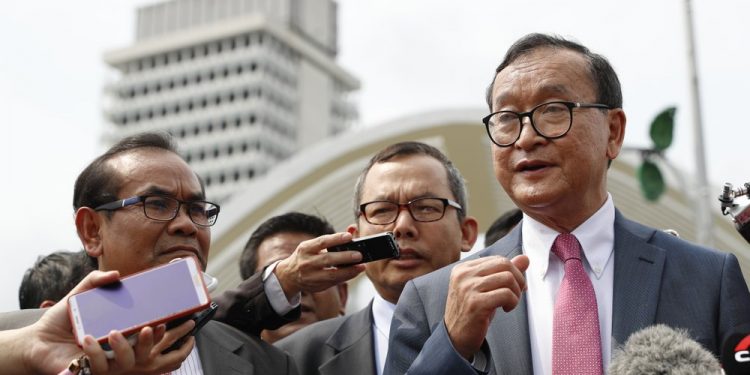 Cambodia's exiled opposition leader Sam Rainsy talks to the media outside Parliament House in Kuala Lumpur, Malaysia, Tuesday, Nov. 12, 2019. Rainsy landed in Kuala Lumpur in a bid to return to his homeland after Thailand had earlier blocked him from entering. (AP Photo/Vincent Thian)

The EU is to publish a report Tuesday on a preliminary assessment that Sam Rainsy said will be the basis for suspending trade privileges for Cambodia. The EU announced earlier this year that it would begin a monitoring process to decide on the lifting of preferential duty-free and quota-free imports from the Southeast Asian nation.

“If they don’t want Cambodia to face an economic crisis, with hundreds of thousands of workers losing their jobs, they must restore democracy,” Sam Rainsy told a news conference outside Malaysia’s Parliament building after meeting a group of Malaysian lawmakers.

Sam Rainsy was allowed into Malaysia from Paris, his home in exile, on Saturday after Thailand barred him and other opposition activists from transiting through the country. But their plan to return home on Saturday, Cambodia’s Independence Day, was thwarted as the Cambodian government mounted tight security at the border.

The EU’s move came after Cambodian Prime Minister Hun Sen’s ruling party won a sweeping victory in 2018 elections. The EU and others said the polls were not free and fair because the sole opposition party — the Cambodia National Rescue Party, co-founded by Sam Rainsy — was dissolved in 2017 by Cambodia’s Supreme Court, which is seen as being under the government’s influence.

Sam Rainsy insisted Tuesday that the timing was now right for peaceful resistance to topple Hun Sen’s government due to the “unique combination of internal pressure and external pressure.”

Phnom Penh’s move Sunday to release party leader Kem Sokha from house arrest after more than two years was an indication of mounting pressure on the government, he said. The treason charge against Kem Sokha remains, and he is banned from politics and leaving the country.

Despite deploying troops to secure the border, Sam Rainsy said he believes Hun Sen is uncertain of their loyalty because “the army will stand with the people, the army will not stand with a dictator.”

He said he was thankful to Malaysia for supporting human rights, and that his meeting with the lawmakers from both the ruling and opposition parties sent a clear message to the Cambodian people that democracy will prevail. The media, however, were barred from covering the meeting.

“I will stay in the region because the situation can change very quickly, and I will go back to Cambodia,” he said.

Mu Sochua, the opposition party’s vice president, told reporters that Sam Rainsy will head to Jakarta, Indonesia’s capital, on Wednesday for meetings with lawmakers and human rights officials but declined to give further details.

Sam Rainsy said it was crucial to restore democracy in Cambodia because Hun Sen’s government is relying on China’s support, which could undermine the country’s independence.

“The Cambodian government is playing with fire by siding with China,” he said. “And this has raised a lot of concern in neighboring countries. So I can assure our friends of Cambodia that when democracy prevails in Cambodia, we will not allow China to build any military facility in Cambodia.”

This article was first published in Washington Post. All contents and images are copyright to their respective owners and sources.