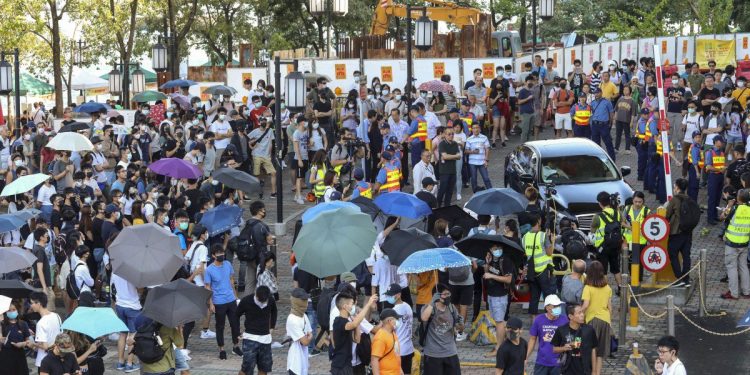 Anti-government protesters gave Hong Kong’s minister in charge of constitutional and mainland Chinese affairs a taste of belligerence and defiance on Sunday, harassing him at a public event and trapping him in his car for 20 minutes before riot police rescued him.

The episode happened just four days ahead of the first Community Dialogue session by Hong Kong leader Carrie Lam Cheng Yuet-ngor on Thursday, where she will meet 150 residents in Wan Chai in her latest effort to alleviate the months-long social unrest triggered by the now-withdrawn extradition bill.

More than 100 protesters had flocked to the Tsing Yi promenade on Sunday afternoon as Patrick Nip Tak-kuen attended an event celebrating the National Day there.

During his speech – in which he called on Hongkongers to seize the opportunities in the Greater Bay Area development plan – protesters chanted slogans, sang the protest anthem Glory to Hong Kong, and even pointed their laser pens at him.

“Five demands, not one less!” the crowd continued to chant when a group of children took to the stage for a dance performance.

Lam announced the withdrawal of the bill on September 4, fulfilling one of the protesters’ five demands, but demonstrators are still pushing for an inquiry into police handling of the unrest, and universal suffrage, among other demands.

Speaking briefly after the event to reporters, Nip said the government was willing to talk to citizens, but was blasted by people who called him a “hypocrite”.

“Actually we are very willing to listen to voices and opinions from all sides, so our upcoming dialogue will have many different methods,” Nip said.

He managed to get into his car despite the protests, but was eventually trapped when protesters – mostly young and masked – blocked it from leaving by sitting down, and later using rubbish bins and sand bags.

Only a dozen officers of the Civil Aid Service were present to protect Nip, when several protesters hurled drink bottles, sandbags and two metal poles at the official’s car, which cracked the front glass of the vehicle. Nip was seen talking on the phone while he was trapped.

The officers later patrolled in the nearby Maritime Square shopping centre, and the Tsing Yi MTR station.

Recounting the incident in a Facebook post later on Sunday, Nip said he had thought about getting out of his car to engage in a dialogue with the protesters, but decided not to do so out of security concerns.

“Some of the protesters are getting more emotional,” he wrote. “I was worried about the safety of citizens, children and staff who were at the carnival if I rashly got out.”

Nip said the government’s determination to resolve the divide through dialogue remained unchanged.