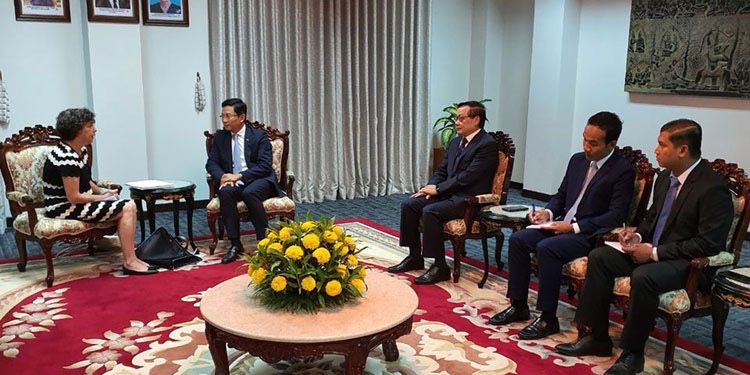 The Cambodian government has labelled claims by Radio Free Asia (RFA) that it has a leaked copy of a just-completed European Commission (EC) assessment on the country’s future to qualify for lucrative tariff exemptions under the Everything But Arms (EBA) scheme as fake news.

The statement, issued late on Friday (Nov 15) by the Ministry of Foreign Affairs and International Cooperation (MFAIC), accuses the US government-funded broadcaster of being a ‘propaganda station at the service of a political faction’, and ‘not a credible source of information’.

The statement follows one similar on Thursday by Ministry of Commerce (MoC) secretary of state Sok Sopheak, who told the Khmer Times that the RFA report was wrong from the start, ‘as the report is not 70-pages long’.

On Tuesday (Nov 12) the Cambodia government received the initial assessment by the EC committee after a nine-month long investigation into civil, political, labor, social, and cultural freedoms in the Kingdom. The following day RFA published what it claimed were extracts from ‘the confidential 70-page report’.

Friday’s statement says ‘the terms and paragraphs presented as quotations that were supposedly taken from the said report were not accurate.

‘Such false information creates unnecessary worries among the hundreds of thousands of workers involved, misleads the public and tarnishes the reputation of government officials whom RFA claimed to have leaked the document’.

RFA did not respond to an email from AEC News Today seeking comment on the Cambodia government statement, or respond to invitation to provide some form of proof that they were in possession of the EBA assessment.

Ms Liu’s statement, issued on the second anniversary of their arrest, said that they ‘have been forced to endure a never-ending nightmare at the hands of Cambodian authorities.

Do the right thing

‘Their unjust prosecution is emblematic of the struggle for press freedom and free expression in Cambodia’, the statement said, calling on the government to ‘do the right thing by dropping the unsubstantiated charges against them. Authorities can end a pointless persecution of two proud journalists and rekindle some hope for a free press in Cambodia’, the statement said.

Cambodia Council of Ministers spokesman, Siphan Phay, told AEC News Today by instant messenger that the government had asked RFA ‘to do the right thing’ in 2017 and they chose to close and leave.

‘This case is in the due process of the court and has nothing to do with the government. RFA is the employer and shall be liable and find a good lawyer for them’, he said.

On September 12, 2017 RFA announced that it would close its Phnom Penh bureau and cease in-country operations, alleging a crackdown on independent media had made it ‘impossible’ to continue in the country.

The announcement followed the closure of the 24-year-old The Cambodia Daily (The Daily) on September 12 following receipt of a $6.3 million tax bill. At the time staff of the publication labelled it an attack on media freedom, before management later reluctantly acknowledged the possibility a “legitimate” tax dispute.

At the time, RFA spokesman Rohit Mahajan, said its local reporters would stop working in Cambodia and coverage would be handled by its bureau in Washington DC, USA.

Some 30 other radio broadcasters including Voice of America (VoA), Voice of Democracy (VoD), and provincial radio stations that carried their broadcasts were also shuttered due to alleged non compliance issues, mostly due to do non-payment of tax.

Mr Uon and Mr Yeang were arrested on November 14, 2017 and charged with ‘supplying a foreign state with information prejudicial to national defence’. The exact nature of the ‘information’ has never been revealed. In March 2018 a charge of ‘production of pornography’ was added after some videos were allegedly found on the men’s phones.

The two men have said that the recording and broadcasting equipment that they were arrested with was for a karaoke business they were planning on opening, while RFA said that its reporters’ contracts in Cambodia had been terminated with the closure of its bureau. Despite this human rights groups, some journalist associations, and RFA continue to refer to it as a media freedom matter. Confused? So too is the trial judge apparently, returning the case to the investigating judge for reinvestigation on October 3.

Ms Liu did not respond to an email inquiring if RFA was paying the legal defence costs for Mr Uon and Mr Yeang, providing financial support to the pair or their families, or details of RFAs previous legal status and taxation history in Cambodia.

The public bickering capped off an extraordinary seven days in Cambodia politics, with the musical chair-like carousel spinning and stopping several times in a week of intrigue, surprise, disappointment, and one-upmanship.

After weeks of theatrics, the deployment of troops, ministers, and civil servants to all corners of the Kingdom — along with the assistance of fellow Asean nations, most notably Thailand — the plans of former opposition party co-leader Sam Rainsy to return and lead a ‘peoples revolution’ were thwarted. Instead mass ork ambok eating events were held nationwide to celebrate Cambodia’s 66th Independence Day.

One small step for democracy

Mr Sokha has been confined to the immediate area around his house for the past 14 month, after spending more than one year in pre-trial detention in Trapaing Phlong prison in Tbong Khmum province. The new rules allow him to leave his house, but prevent him from traveling outside Cambodia or engaging in political activity. The treason charge against him remains.

On Friday the investigating judge announced that he had completed his inquiry, paving the way for a trial to proceed or for the charges to be dismissed. When the decision will be announced has not been disclosed as yet.

As foreign diplomats queued up to visit the reinvigorated Mr Sokha, Rainsy was still vowing that he was still on his way to Cambodia, while being denied boarding for a flight from Kuala Lumpur to Jakarta, where journalists were left waiting for him for more than six hours. When he was allowed to board a flight the next day, he subsequently flew into immigration problems on arrival.

With few people any longer believing his talk of return ‘to stare down the machine guns and tanks and sacrifice’ himself for the country and democracy, Rainsy threw his supporters under a bus on Friday, announcing that he was seeking diplomatic solutions instead.

He arrived back in Paris on Saturday morning where he has lived in self-imposed exile for the past four years.

Meanwhile, Cambodia’s Ministry of Justice has been frantically working to full-fill instructions from Prime Minister Hun Sen to release on bail more than 70 supporters of Rainsy who had been detained for colluding with his plan to stage a coup.

Opposition supporters who had fled overseas in fear of being arrested should return, Mr Hun told a gathering in Kampot province on Thursday, saying that they will be safe.

With some 90,000 garment jobs forecast to be lost if the benefits of the EBA exemptions are removed, Cambodia’s political carousel looks like it is just warming up.

This article was first published in AEC News Today. All contents and images are copyright to their respective owners and sources.