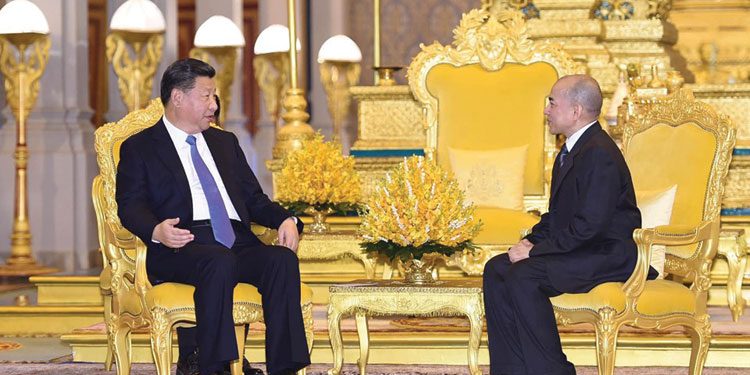 According to the China Daily, Mr Xi said that the Kingdom and China have continued to forge deep ties since the 1950s.

With the two nations establishing diplomatic ties in the 1950s, the two peoples “have always been sticking together through thick and thin and watching out for each other, and forged a deep friendship,” Mr Xi was reported as saying.

“Mr Xi said he is willing to work together with King Sihamoni under new historical conditions to carry on the China-Cambodia traditional friendship, elevate their strategic cooperation and push for continuous new results in the effort to build the China-Cambodia community with a shared future, so as to benefit the two countries and peoples,” the report said.

Mr Xi said that the King has maintained a national unity among Cambodian people and promoted development.

“The King has made important contributions to maintaining national unity and promoting national development, and has been deeply loved by Cambodian people,” Mr Xi was quoted as saying.

King Sihamoni succeeded his father on October 29, 2004, a week after the abdication of late King father Norodom Sihanouk. The King and Queen Mother Monineath Sihanouk regularly flew to Beijing to have their medical check-ups and treatment.

In his message to Mr Xi last month to celebrate the 70th anniversary of the founding of the People’s Republic of China, King Sihamoni also praised the Chinese government for its role in advancing the country and solidifying diplomatic ties with the Kingdom.

“Your Excellency’s Belt and Road Initiative as well as the initiative of jointly building a community with a shared future for mankind are praiseworthy,” the King said.

“I agree with and support President Xi’s message. It is correct,” Mr Siphan said. “His Majesty the King has fulfilled his great effort to maintain a national unity, peace, stability and adhere to the constitution.”

Kin Phea, director-general of the International Relations Institute at the Royal Academy of Cambodia, yesterday said under the King’s reign, the Kingdom enjoys development.

“I think President Xi’s message is reflective of the truth,” Mr Phea said. “His Majesty does not take sides with any political parties at all. He is above all politicians. He maintains national unity because he is apolitical or has no political blemish.”