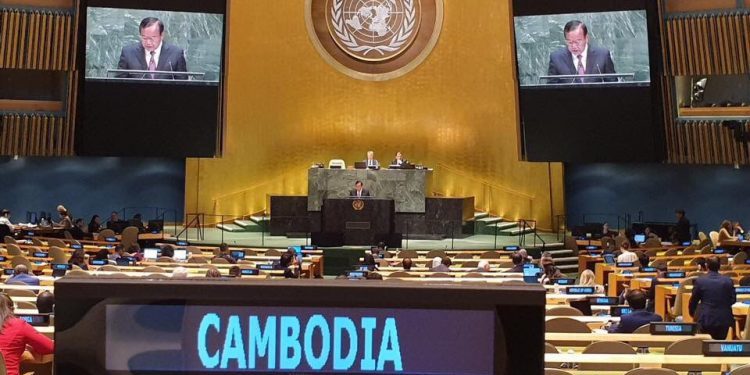 Addressing  the general debate of the 74th session of the General Debate of the United Nations General Assembly in New York, Minister of Foreign Affairs Prak Sokhonn said foreign interference in the sovereign state’s internal affairs have created tension, chaos and suffering.

Prime Minister Hun Sen previously has said that Cambodia is not under foreign rule and opposes foreign interference in the Kingdom’s internal affairs. He noted that the CPP is determined to firmly defend the independence, sovereignty, and territorial integrity of Cambodia, noting that foreign interference was the major cause of disaster.

Mr Sokhonn said that interference has been common and goes against what was enshrined in the UN charter.

“An authorization to interfere in the affairs of a sovereign state has been introduced into international law, but only for humanitarian reasons.” Mr Sokhonn said.

He said it is indeed deceptive and deceitful that humanitarian reasons were used as a pretext to interfere in domestic affairs and even to provoke regime changes by undemocratic means.

“Governments fabricate claims and accusations based on false information relayed by the mainstream media, or rather moonlighting media, to justify the interference of all kinds, creating instability, tensions and most of the time chaos and people’s suffering.” he added.