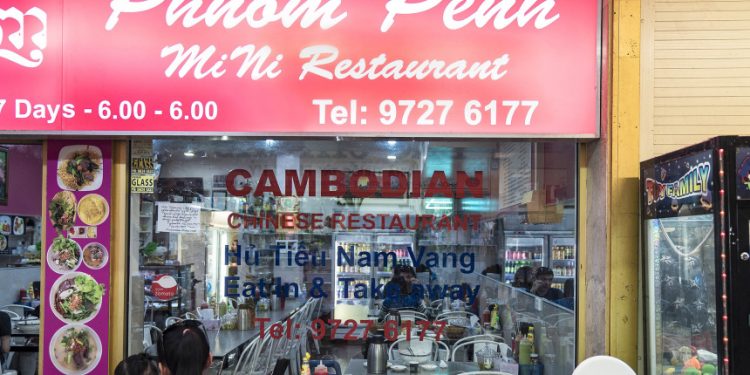 Between 6.30am and and 11am Cambodian restaurant Phnom Penh looks like a Southeast Asian street stall. Almost every table is tightly packed with people, some wearing T-shirts, others in suits.

Most people are eating large wooden bowls of num banh chok, a light fish-and-rice-noodle soup that’s a pale yellow colour from the pounded turmeric root and lemongrass, and thick because of the coconut milk. Some bowls have snake beans and fried onions and others are mixed with lemon juice, cucumber and bean sprouts. The other popular order is kuy teav, a simple pork-and-chicken broth either served next to or poured over a mix of rice noodles seasoned with kampot pepper and garlic oil, as well as shallots, lettuce, pork offal and blood jelly.

From noon to 5.30pm there’s an older crowd. There’s still a lot of slurping but most of the noodles have been replaced with rice, bowls of bolognaise-coloured prahok k’tis (minced-pork dip) that’s pungent and punchy from the prahok (a salty fermented fish used in many Cambodian foods), plates of salty prahok-spiced omelettes, and clay pots of orange stew so packed with spice they’re reminiscent of curries from across the border in Thailand.

Most of the diners are Cambodian and order food without looking at the menu. The owner, Thida Kak, understands some people aren’t familiar with Cambodian food and, talking through an interpreter, is hesitant to describe it, not knowing the right words to use. She settles on saying it has bold flavours.

Kak won’t like us saying this but we think it’s not so different to Thai food in many ways: the powerful flavours; the generous use of herbs and spices; the balance of sour, salty and occasionally bitter ingredients. But it’s far less spicy, less sugar is used and there isn’t a lot of coconut (num banh chok is one of the popular exceptions).

You’ll find many crossovers with Vietnamese dishes too because the countries share a border and history of French colonialism. A good example of this is the baguettes. Cambodia has its own version of banh mi, although Kak doesn’t make it here. She does, though, serve crunchy rolls with a side of rich Cambodian breakfast curry. (If you’ve ever had bo kho, the Vietnamese beef stew, it’s similar Kak says).

In Sydney Cambodian food is rare, existing (on our count) in four Cabramatta restaurants, a Haymarket food stall and another restaurant in Cremorne. In Sydney’s Cambodian community, the general opinion is Battambang is best, Phnom Penh is also great (particularly for noodles), and relative newcomer Siem Reap has potential.

Despite its almost five-years of operation, Phnom Penh doesn’t have much of a reputation outside of the Cambodian and Cabramatta communities, most likely because it’s tiny and hidden in an arcade.

Kak, who is also the head chef, comes from a long line of restaurateurs. She ran an eatery on the outskirts of Phnom Penh for more than a decade with her mum, serving a menu similar to but smaller than what’s available here (there are many dishes she can’t make in Sydney because the right ingredients aren’t available). Before that she helped her mum serve noodles from a hawker stall outside their house, and before that her grandparents and great grandparents also served food on the streets of the Cambodian capital.

Kak came to Sydney in 2002 after falling for an Australian-Cambodian man. Although at the time the only place you could eat Cambodian food was at Battambang (which opened around 20 years ago), Kak wasn’t particularly eager to get into the game. But when more of her family moved over and Kak and her kids had more support, she felt it was time to continue her family’s legacy. When we ask if she’s proud to bring her culture to Sydney, she says yes but also that this is simply what she does. Food is her life.

This article was first published in broadsheet.com.au. All contents and images are copyright to their respective owners and sources. 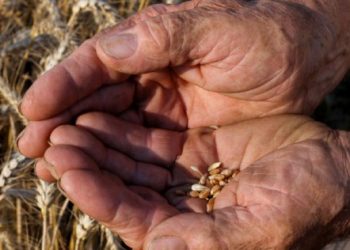 Amid Ukraine war, it’s time to give plant-based global diet another look

A new joint study by researchers in China and the Netherlands has shown that moving towards plant-based diets could help... 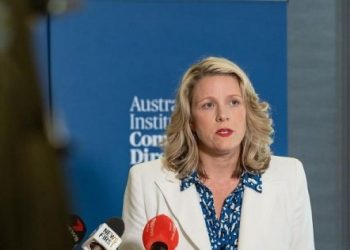 SYDNEY - An international traveller has been fined and refused entry to Australia after trying to bring meat into the...