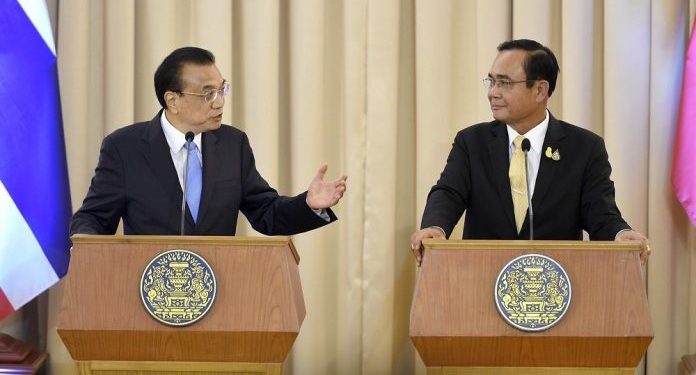 When Prime Minister Gen Prayuth Chan-ocha recently compared Thailand to an ant and China to a lion in front of Chinese Premier Li Keqiang in Bangkok, it raised a few Thai eyebrows.

While some might say Prayuth was merely being humble and wanting to flatter his Chinese counterpart (he did say the ant could at times be helpful to the lion), or even realistic about the situation today, others found his remark disturbing.

Prachachart Party deputy chairman Nitiphumthanat Ming-rujiralai chastized Prayuth on his Facebook as something that shouldn’t have come out of Prayuth’s mouth because he is a national leader.

“Making such comparison may made the status of Thailand to seem low in the international arena. Every nation which sovereignty has equal dignity. Those wanting to compare itself as small should be a vassal state, a protectorate of a colony.”

The debate is actually not new. Over a century ago, in a 1889, author George B. Bacon wrote in his book “Siam: The Land of the White Elephant” that: “There still remains some trace of a remote period of partial vassalage to the Chinese Empire, in the custom of sending gifts – which were originally understood, by the recipients at least, if not the givers, to be tribute to Peking.”

Those who have the chance to visit the National Palace Museum in Taipei should see and admire the prized Xuande incense burner stored there. Made in 1428, the 8.2-centimeter tall bronzework was a gift sent by Ayutthaya Kingdom as a tribute to the Ming Emperor.

Nearly three centuries and a half later, when King Taksin established Thonburi as the new capital after Ayutthaya was destroyed by the Burmese in 1767, he sent a letter seeking recognition to the Qing Court. The letter, in Chinese, is now also kept at the National Palace Museum in Taiwan.

While historians can continue to debate as to whether Thailand, then known as Siam, was ever a semi-vassal of Imperial China, the Ming and Qing Dynasties are no more, and there is no need for Thais today to willingly want to become China’s vassal state.

There was a “Century of Humiliation” from the latter years of Qing Dynasty and the founding of modern China in 1945 when China was weak and “the Sick man of Asia.” During this period, Thais developed a very different and more equal attitude towards China and its people.

They welcomed an untold number of Chinese migrants, including my paternal grandfather who left the island of Hainan for Bangkok, seeking a better life.

For a century, up until the past decade or so, Thais do not feel inferior compared to Chinese, be it culturally or economically. We also do not have any bitter history that may poison Sino-Thai relations, unlike Vietnam, who was subjugated by the Chinese for almost a millennia and had a brief war with China just 40 years ago. Or Indonesia, which descended into an anti-Chinese riots in 1998 in Jakarta, Medan and Surakarta.

On the other hand, Thailand should not wish to let itself be overwhelmed by Chinese investments to the point of becoming a virtual economic colony.

Cambodia, for example, is increasingly under the Sinosphere just as the Western nations are wary about its lack of democratic credentials under strongman Hun Sen. In fact, Cambodian Foreign Ministry quickly issued a statement siding itself with the Chinese government in the early stages of the Hong Kong protests.

Statista, an online statistics website, reported last month that Cambodia and Laos are among the countries owing external loan debt to China at a level above 25 percent of its GDP. The two ASEAN member states and neighbors joined countries like Niger, Djibouti, Kyrgyzstan and the Maldives in similar situations.

Thailand, which is listed as having less than one percent of its GDP owed to China, should steer clear of such debt trap.

Any loan as part of the high-speed rail connecting Kunming to Bangkok as part of China’s Belt and Road Initiative should be considered very carefully, not just by the Thai government but the Thai people as to its economic sustainability.

Napoleon Bonaparte was right in a quote attributed to him two centuries ago when the French emperor supposedly said: “China is a sleeping giant. Let her sleep, for when she wakes she will move the world.”

China is no longer asleep and if you cannot feel the rise of China in Bangkok and elsewhere then probably you are asleep.

Yet Thailand can be more than just an ant and not a semi-vassal state of China if its people cherish its independence and national pride. Thailand should always be a good friend of China, as a much smaller partner, while fostering better relations with the EU, Japan, South Korea, India, the US and other nations, to neutralize China’s influence.

But never be an ant.

This article was first published in Khaosod English. All contents and images are copyright to their respective owners and sources.