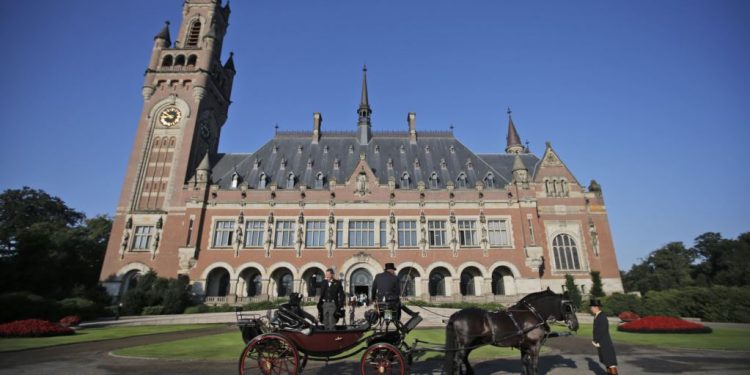 THE HANGUE — In a wood-panelled hall of the ornate Peace Palace at The Hague, lawyers pressing a case against Myanmar for alleged genocide against its Muslim Rohingya minority will next week ask judges to order immediate action to protect them from further violence.

During three days of hearings starting Dec. 10, it will ask the 16-member panel of U.N. judges at the International Court of Justice (ICJ) to impose “provisional measures” to protect the Rohingya before the case can be heard in full.

More than 730,000 Rohingya Muslims have fled Myanmar to neighboring Bangladesh since a 2017 military crackdown, which U.N. investigators found in August to have been carried out with “genocidal intent”. Myanmar vehemently denies allegations of genocide.

The office of Myanmar’s civilian leader Aung San Suu Kyi, a Nobel peace prize laureate, has said she will lead her country’s defense personally. Myanmar’s legal team is expected to argue that genocide did not occur, that the top U.N. court lacks jurisdiction and that the case fails to meet a requirement that a dispute exists between Myanmar and Gambia.

Gambia’s request for a provisional injunction is the legal equivalent of seeking a restraining order against a country.

“If the court feels there is sufficient threat and it needs to step in, it can … order Myanmar to cease and desist in terms of military operations and violence so that civilians are protected,” said Priya Pillai, an international lawyer with the Asia Justice Coalition, an NGO.

In an overcrowded refugee camp in Bangladesh, 22-year-old Mohammed Nowkhim said he and fellow Rohingya were “waiting and praying” for a good outcome in The Hague, although most will be unable to watch the hearings due to poor internet access.

Nowkhim said he escaped Buthidaung town, an urban center of northern Rakhine state, with his neighbors in August 2017.

“Our remaining villagers decided that we can’t stay any more. If we stay they will kill us. So we gathered in one place and started our journey to Bangladesh,” he told Reuters.

“Our Rohingya communities are waiting for the resolution of ICJ. We hope that something will change after ICJ,” he said.

A decision on provisional measures is expected within weeks. Hearings dealing with the core allegation of genocide could begin in 2020, but cases at the ICJ, the leading U.N. court for disputes between states, often take years.

The legal threshold for a finding of genocide is high. Just three cases have been recognized under international law since World War Two: Cambodia in the late 1970s; Rwanda in 1994; and Srebrenica, Bosnia, in 1995.

“Proving genocide has been difficult because of the high bar set by its ‘intent requirement’ – that is showing the genocidal acts, say killings, were carried out with the specific intent to eliminate a people on the basis of their ethnicity,” said Richard Dicker, head of the international justice program at New York-based Human Rights Watch.

Buddhist majority Myanmar rejects accusations of genocide against the Muslim population, but the government declined to provide details about its defense case ahead of the hearings.

“Allegations are easy,” Thaung Tun, a senior member of Suu Kyi’s cabinet, said in a tweet on Dec.1.

“But in law genocidal intent has to be established beyond reasonable doubt. It shouldn’t be confused with personal motive prompting actions of a perpetrator. There must be sufficient evidence to prove, beyond a reasonable doubt, a policy to destroy the group.”

Myanmar has previously denied almost all allegations made by refugees against its troops, including of mass rape, killings and arson. It says the army was engaged in a legitimate counterterrorism operation against Rohingya militants.

The U.N. investigators concluded that sexual violence committed by Myanmar troops against Rohingya women and girls in 2017 indicated the military intended to destroy the mainly Muslim ethnic minority.

Myanmar’s government failed to hold anyone accountable and was therefore responsible “under the Genocide Convention for its failure to investigate and punish acts of genocide”, the investigators’ report said.

Those findings, along with other court cases launched against Myanmar in recent weeks, could play an important role in the ICJ proceedings.

“It’s difficult to overstate the importance of what is unfolding at the ICJ,” Dicker, at Human Rights Watch, said. “The global significance lies in that this is the first time the Genocide Convention has been put to use in the way its framers intended.”

This article was first published in VOA Cambodia. All contents and images are copyright to their respective owners and sources.