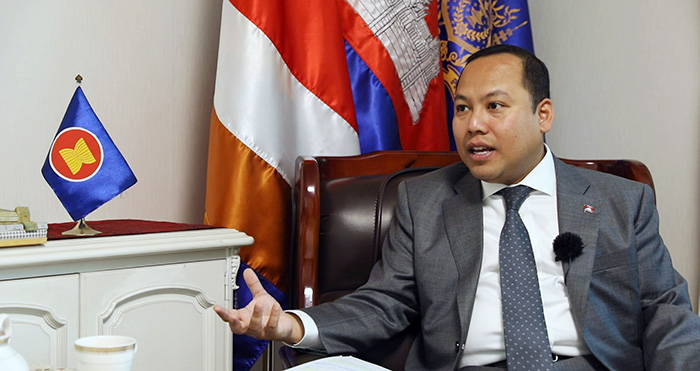 Cambodia has many reasons to see the inaugural Mekong-Republic of Korea (ROK) Summit on Nov. 27 as a sign that it is right on track in expanding its presence in ASEAN-South Korea relations.

Proposed by Cambodian Prime Minister Hun Sen, the summit will follow the broader ASEAN-ROK Commemorative Summit from Nov. 25 to 26.

The meetings will be held in Busan, where all 10 ASEAN leaders will celebrate 30 years of ASEAN-South Korea ties.

The second summit will extensively and exclusively discuss South Korea’s cooperation with the five countries in the Mekong sub-region ― Cambodia, Laos, Myanmar, Thailand and Vietnam.

This is expected to help accelerate ASEAN efforts to reduce the development gap among the 10 members.

Four of the five, except Thailand, are post-socialist economies. They are latecomers to ASEAN that was founded in 1967 to counter the spread of communism and advocate for a free market economy in the region. Cambodia was the 10th and last member to join in 1999.

The Nov. 27 summit will also take place as Cambodia and South Korea ― after severing their 1970 diplomatic treaty in 1975 over Khmer Rouge rule and restoring it in 1997 ― continue bolstering bilateral cooperation.

“The 30th anniversary marks another great milestone between ASEAN and South Korea … And Cambodia has played a significant role in advancing and pioneering their strategic ties,” Cambodian Ambassador to Seoul Long Dimanche told The Korea Times recently.

He highlighted that the country had served as coordinator of ASEAN-South Korea relations from 2015 to 2018. The position rotates every three years by alphabetical order.

“In this regard, Cambodia warmly welcomes this tremendous milestone and looks forward to keep contributing to the efforts in enhancing this mutually beneficial partnership,” Ambassador Long said.

He said the New Southern Policy is “another significant doorway” to better connect South Korea with ASEAN and Cambodia.

It is in tandem with ASEAN’s principle of a people-centered community, which Cambodia pursues through its Rectangular Strategy.

Introduced by Hun Sen’s Cabinet, it is a long-term socio-economic development plan with four objectives ― growth, employment, equity and efficiency.

The plan, updated every five years, is in its fourth round. It aims to keep peace, political stability and public order, to strengthen accountability and integrity in the public administration, to bolster private sector governance and to speed up work effectiveness.

“The New Southern Policy will play a big role to help narrow the development gap and enhance connectivity in the Mekong region,” the envoy said.

Cambodia-South Korea trade volume has seen an almost a 20-fold increase to $980 million in 2018 since re-establishing relations in 1997.

Foreign direct investment (FDI) from South Korea amounted to over $4.47 billion, covering 214 projects.
South Korea will provide $700 million of loans in the 2019-23 period, including $17 million this year.

Cambodia is ranked second after Vietnam in receiving the most official development assistance (ODA) to ASEAN from South Korea. The ODA projects include restoration of the historic temple complex Angkor Wat by the Korea International Cooperation Agency (KOICA), which operates under the Ministry of Foreign Affairs.

“Cambodia-Korea bilateral relations since their establishment in 1970 have seen ups and downs amid many occasions,” Ambassador Long said. “However, the re-establishment of diplomatic relations in 1997 has reshaped the landscape of partnership and cooperation in all aspects between the two sides to a higher level.”

Moon was the first South Korean leader to travel to the Southeast Asian kingdom since 2009. He was accompanied by 125 business delegates, many from Samsung Electronics, Hyundai Motor and other conglomerates.

He referred to “favorable environments” being pursued by Cambodia for international investors. The efforts include an envisioned law on special economic zones, in-depth business reforms, a government-private sector forum and an industrial policy transforming the country into a skill-driven economy by 2025.

“The support and assistance from South Korea in investment projects and technological support are critically in need,” the envoy said.

When asked about denuclearization of the Korean Peninsula, he said Cambodia observes the Southeast Asian Nuclear-Weapon-Free Zone Treaty of 1995.

He also said Cambodia has been a friend of North Korea for decades and it “can play a productive role in mediating and settling the dispute if both parties agree to seek our participation.”

Referring to the Cambodian Civil War in the 1960s and 70s, the envoy said his country “sympathizes” with the two Koreas.

“Peace and stability are our long-standing commitment and we always encourage others, especially on the Korean Peninsula, to strive on that too by encouraging both parties to solve the issues through negotiations and peaceful dialogue rather than military means,” he said.

He shrugged off Western criticism of Hun Sen’s 34 years in power.

The ambassador argued that Cambodia has a multi-party democratic system and that people have the right to vote and decide who the leader will be.

“And if you look through what Samdech Techo Hun Sen the prime minister has done for Cambodia, you will understand why Cambodian people have so much faith in him” he said.

He noted that Hun Sen, 67, took part in ending the Khmer Rouge regime in 1979, led negotiations for the 1991 Paris Peace Agreement, was an architect to end the civil war and developed the country “from “scratch” through the Rectangular Strategy.

Ambassador Long has served in Seoul since 2016, making him the longest-serving ambassador from an ASEAN country.

This article was first published in Korea Times. All contents and images are copyright to their respective owners and sources.