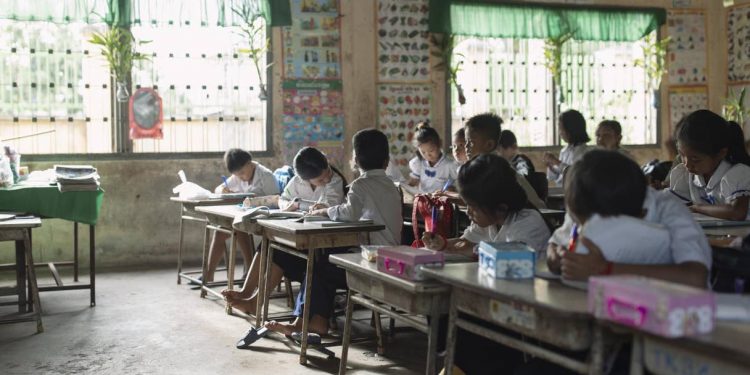 In a quiet suburb of Phnom Penh, former primary school teacher Samphy, 72, is seated at her dining table. She reminds us that it was only 40 years ago that an estimated two million people perished under the regime of the Khmer Rouge, orchestrated by the Marxist nationalist dictator Pol Pot.

The so-called “New Cambodia” only lasted four years between 1975 and 1979, but marked an end to over two thousand years of Cambodian history. Pol Pot’s social engineering experiment to create a “master race” failed. His legacy is a nation partially paralysed, but fighting to emerge from the darkness, brutality and horror of a genocide.

The Khmer Rouge had closed Cambodia off from the outside world. All residents were forcibly dragged out of major cities, including Phnom Penh. Even educators like Samphy were banished to the provinces to work under the brutality of the regime.

The memories of this regime are haunting. One night, under a canopy of stars, Samphy peeled away from one of the many groups conscripted to landscape the paddy fields. As she dissolved into the thick jungle of Pursat province, taking a shortcut home, her thoughts were solely on returning to check on her young children left to fend for themselves. What she saw that night, decades later, reduces her to emotion she cannot hold back. Silhouetted in the moonlight, a long line of fellow villagers knelt, gagged and bound. A young female general was decapitating one after the other before she kicked their bodies to the mud.

“Many times people were forced to dig their own graves before execution,” Samphy explained. “Anyone seen as enemies of the regime were killed. The rest died from starvation, disease or from being overworked. My husband, who was a teacher, and my 20-day-old daughter were among those that perished.”

“When they live in poverty they might not be capable of dreaming bigger than their environment. But after exposure to education, to books, to knowledge they never dreamed of, they raise their aspirations.”

In the “New Cambodia” there was a role reversal in class structure. The labouring backbone of the country assumed senior positions to enforce the changes under the regime. The educated were systematically eliminated; students, teachers, doctors and even those who simply wore spectacles were targeted and murdered. Those fortunate enough to survive lived in fear, adopting simple vocabulary, pretending to be less educated to avoid detection. According to the University of Phnom Penh, out of a thousand academics, only 87 survived. Despite the risks, Samphy held on to pencils and paper, the building blocks that she hoped could one day help rebuild her nation.

The regime’s deliberate attack on education was designed to be irreversible, destroying an estimated 90 per cent of schools. After the fall of the Khmer Rouge, every aspect of society had to be rebuilt, especially education. Today, in Cambodia, the poor population are still largely uneducated. An entire generation of children during or in the years following the regime missed out on school.

When parents haven’t been to school themselves and can’t afford to feed their child, the chances of the child attending school are slim. This lack of household funds to cover school supplies, like books and uniforms, and informal school fees, contributes to the high number of out-of–school children in Cambodia at primary level of education, estimated by Unesco to be over 186,000 in 2018.

Many in Cambodia who were displaced to the countryside during the regime returned to the cities in search of better economic opportunities and to rebuild their lives. Illiteracy prevents many from finding secure work. Without land, many set up home in poor urban settlements.

“Targeting the provision and protection of education helps the most marginalised children realise their rights, enriches their wellbeing and improves their futures,” Dr Mary Joy Pigozzi, executive director of Educate A Child (EAC) a global programme of Education Above All Foundation (EAA), explains. “This is especially important in countries like Cambodia, where rebuilding strong education systems post-conflict is a long and difficult process.”

Through its EAC programme, EAA has committed to enrol 10.4 million out-of-school children at primary level across 50 countries. EAA and Aide et Action International (AEAI), through its Cambodian Consortium of Out of School Children (CCOSC), has reached 57,448 out-of-school children in the first phase of the partnership, offering an educational lifeline to children living in a perpetual cycle of multidimensional poverty.

“Children typically learn from what they see around them,” Christine Redmond, communication and partnership manager, Aide et Action Southeast Asia and China explains. “When they live in poverty they might not be capable of dreaming bigger than their environment. But after exposure to education, to books, to knowledge they never dreamed of, they raise their aspirations. The changes in Cambodian’s education system aren’t happening overnight, but they’re happening nonetheless.”

Around the world today, schools and teachers are often deliberately targeted. Under the Khmer Rouge regime Samphy understood the grave consequences of resistance, but felt compelled to resist nonetheless. Cambodia today owes its gratitude to people like Samphy. Together, these symbolic acts of bravery and sheer determination to survive against all odds have managed to keep the dreams of a nation alive.

This article was first published in Independent. All contents and images are copyright to their respective owners and sources.