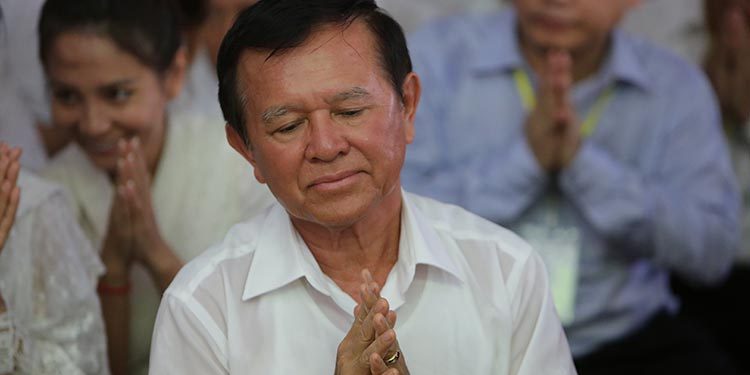 Phnom Penh Municipal Court yesterday set January 15 as the date to begin the treason trial against former opposition leader Kem Sokha as the Appeal Court dismissed an effort by his lawyers to halt proceedings.

Kem Sokha was arrested in September 2017 and charged with treason for allegedly colluding with the US to overthrow the government. Two months later, the CNRP was dissolved by the Supreme Court and its 118 senior members were banned from politics for five years.

The hearing date was fixed as the Appeal Court yesterday turned down an appeal by Kem Sokha’s lawyers who lodged a complaint against the Phnom Penh Municipal Court decision to send his treason case to trial.

The rejection was made since the appeal was considered inadmissible according to the Code of Criminal Procedure.

Touch Tharith, spokesman of the Court of Appeal, yesterday said that Presiding Judge Khun Leangmeng rejected the appeal because it was inadmissible.

“An appeal against a closing order submitted by lawyers of the defendant cannot be accepted based on articles 404 of the Code of the Criminal Procedure,” Mr Tharith said.

One of Kem Sokha’s four lawyers, Meng Sopheary, yesterday said that she was aware of the trial date, but refused to comment.

“I cannot comment right now because I have not officially received the summons,” Ms Sopheary said.

Another of Kem Sokha’s lawyers, Chan Chen, said he was very disappointed with the case being sent to a trial.

“Local and international opinions, including mine, think the case is politically motivated and should be settled through politics,” Mr Chen said.

Political analyst Lao Mong Hay yesterday said that the trial would dampen efforts by other governments to have the charges dropped.

“Now that Kem Sokha is being tried, the government could refer to the sub judicial principle (the case is under judicial consideration) to dampen the EU’s demand for his release,” Mr Mong Hay said.