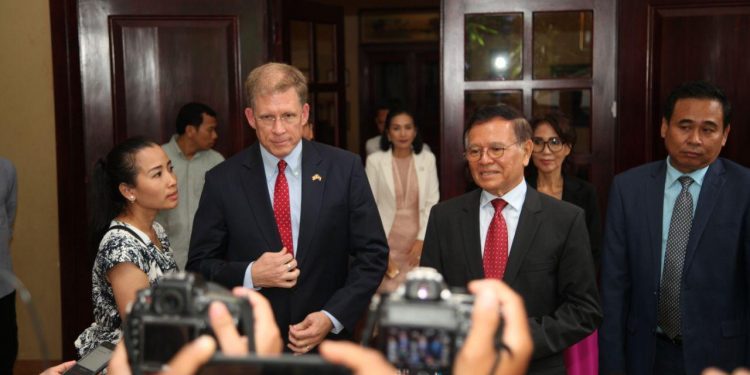 Former opposition leader Kem Sokha met with US ambassador to Cambodia Patrick Murphy, 11 November 2019, saying that he should be allowed to engage in politics.

Speaking to reporters after meeting with Mr Murphy at his residence in Phnom Penh’s Tuol Kork district, Mr Sokha said that he should not be barred from engaging in politics.

“I like journalists and I like to meet the people but unfortunately, I am banned from engaging in political activities and not to talk about politics,” he said.

The Phnom Penh Municipal court on Sunday eased Mr Sokha’s restrictions due to his lawyers’ request and his good cooperation with authorities. Mr Sokha remains under court supervision, banned from leaving the Kingdom, refrain from engaging in political activities and respond if summoned by all. Mr Sokha was arrested in September 2017 for allegedly colluding with the US to topple the government and charged with treason.

Mr Murphy also called on the Cambodian government to drop treason charge against Mr Sokha and lift political bans on his members and activists.

However, we think it is very important to see more and we advise  as a friend of the Kingdom of Cambodia that  the authorities  find a way to restore Mr Kem Sokha entire freedom and liberty and drop the charges against him,” Mr Murphy said.