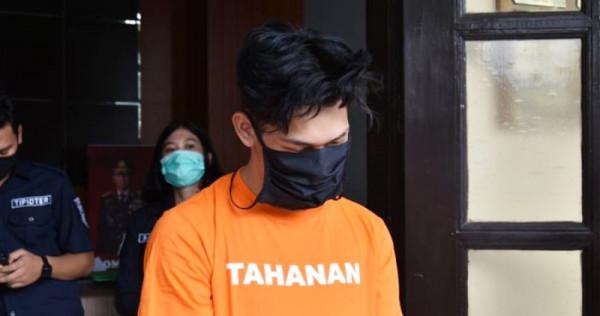 Indonesian vlogger Ferdian Paleka has been arrested after posting a YouTube video of him and his friend apparently pulling a “prank” on transwomen by giving them fake staple food donations in the form of boxes containing garbage.

Ferdian, whose video met a chorus of condemnation from members of the public, was apprehended by the West Java police on the Tangerang-Merak toll road on Friday (May 8).

West Java Police spokesperson Sr. Comr. Saptono Erlangga said that after a four-day manhunt and monitoring Ferdian’s father, the police learned that the father planned to pick up Ferdian and his cocreator friend, identified only as A, at Merak Port in Banten, upon returning from his hideout in Palembang, South Sumatra.

“His father, H, and his uncle, J, picked them up at the port. We then followed them and managed to arrest them on the toll road,” Saptono said on Friday as quoted by kompas.com.

He added that the police would also question both Ferdian’s father and uncle.

Last week, the vlogger uploaded a video in which he and his friend Tubagus Fahddinar claimed they were going to give out “aid packages” in the form of instant noodle boxes that actually contained bricks and garbage for people whom they called bencong, a pejorative Indonesian term for transwomen, in West Java’s provincial capital of Bandung.

“We want to survey whether or not the bencong are on the streets in this fasting month […] If we encounter them, we’ll give them the packages. But if they’re not around, that means the city is safe from them,” Ferdian said in the video.

The video appeared to show Ferdian and his friend handing over the fake donations while laughing at several transwomen they met on the streets.

Many viewers, including lesbian, gay, bisexual and transgender (LGBT) rights activists, took to social media to express their anger and called on the public to report Ferdian’s video to YouTube. Some internet users also said that Ferdian had previously posted videos with content that degraded women and sex workers.

YouTube has since removed the video for violating YouTube’s policy on harassment and bullying. However, Ferdian seemed to express no remorse as his next “prank” was to upload a fake apology in his Instagram stories. He even jokingly wrote he would turn himself in if he got 30,000 more followers first.

On Sunday night, angry neighbours protested outside Ferdian’s home in Baleendah subdistrict in Bandung. The police were also present but Ferdian was not at the location.

The next morning, Ferdian’s friend Tubagus handed himself over to the Bandung Police. Four transwomen who fell victim to the prank also reported Ferdian and his friends to the Bandung Police on Monday, accompanied by representatives of transgender community Srikandi Pasundan.

“We decided to report [the incident] to the police to create a deterrent effect for the perpetrator so that such things will not occur again in the future,” said one of the victims, Sani, 39, as quoted by Kompas TV.

Another victim named Dini, 56, said she was delighted when she received the aid but was saddened and angered on discovering that the boxes that she and Sani had received contained a brick and rotten bean sprouts, respectively.

“[We were] treated like trash. We hoped to get noodles but it turned out they were [a brick and garbage]. I feel hurt and humiliated,” she said.

Dini added that she was aware that she was still going out despite the large-scale social restrictions (PSBB) to prevent the spread of COVID-19. “I’m just struggling to put food on my table. That’s why I was initially happy [about getting the box], it turned out it was an insult,” she said.

Head of the Bandung Police Criminal Investigation Department Adj. Sr. Comr. Galih Indragiri alleged Ferdian had violated Article 45 of the Electronic Information and Transactions (ITE) Law on defamation, as well as Article 36 of the same law, which carries a maximum punishment of 12 years’ imprisonment and a fine of Rp 12 billion (S$1.18 million).

Human Rights Watch (HRW) researcher Andreas Harsono lauded the solidarity and support shown by Indonesian citizens, which helped to bring the case to the police amid concerns that “transwomen have often been discriminated against” in society.

Ren was later sentenced to a 15-month prison and paid US$22,300 compensation to his victim.