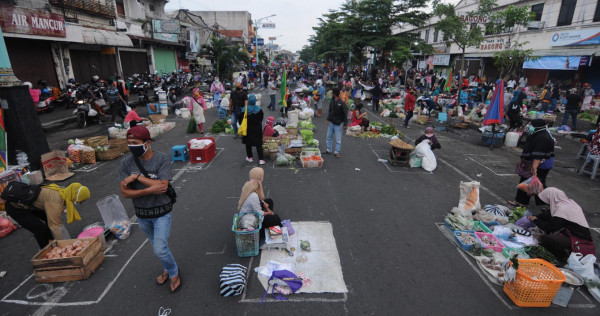 The Trade Ministry has issued a circular asking regents and mayors in Indonesia’s regions to support the operations of traditional markets while implementing strict health protocols to prevent the further spread of COVID-19.

The ministry handed over on Friday disinfection chambers, hand-washing facilities, masks, staple foods and funds to Central Java Governor Ganjar Pranowo to support the implementation of physical-distancing measures in traditional markets in the region.

Suhanto said they had previously received reports that many traditional markets had closed down operations ever since the government implemented large-scale social restrictions (PSBB) in several regions to stem the transmission of the virus.

The ministry later conducted meetings with the House of Representatives and the COVID-19 task force, during which they agreed to support the operations of traditional markets “as long as they implement the standard health protocols.”

Suhanto said traditional markets in Central Java were among the first in the country to implement physical-distancing measures between sellers and customers.

On April 28, the Salatiga administration allowed sellers to open stalls along a major road in the city to ensure physical-distancing measures were followed.

Sellers and officials set a distance of 1 meter between booths, with the location of each booth marked out with chalk.

Bintaro Market in Demak, Central Java, and four other traditional markets in Tegal regency, which has imposed PSBB, followed suit soon after.

“We urge regents and mayor to follow the Central Java administration’s steps by allowing vendors to sell their products along the road if the existing traditional markets are too crowded [to allow physical-distancing measures],” Suhanto said.

He explained that traditional markets played a very important role in the people’s economy, especially as farmers and sellers depend for their livelihoods on such trading activities.

“If we close [traditional markets], our economy will be affected for sure. So, it’s better to let them maintain operations by implementing physical-distancing measures,” he said, “This would allow sellers to keep their jobs, farmers to sell their products and economic activities continue.” (nal)

This article was first published in The Jakarta Post.