Huge dragon fruit farm community to be grown in Cambodia 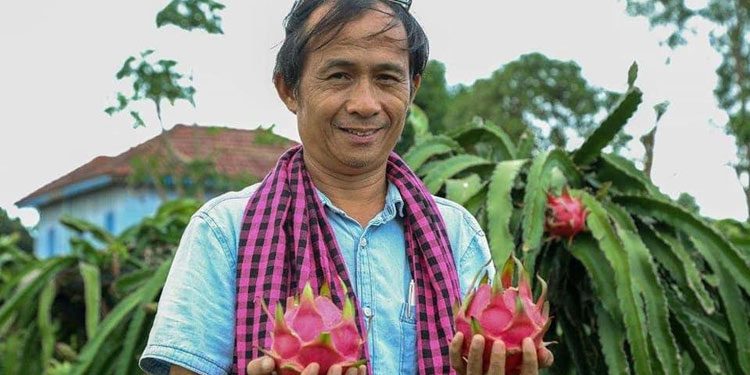 A local investor has created a large-scale dragon farm community in Preah Vihear province in response to local and export demand.

“We expect ultimately to create 3,000 to 10,000 jobs for residents,” he said, adding that the fruit has great potential in the market, noting that Vietnam exported $1 billion of the fruit to international markets last year.

established in 1958 to perpetuate former Philippine President Ramon Magsaysay’s example of integrity in governance, courageous service to the people and pragmatic idealism within a democratic society. He was given it in recognition of his creative fusion of practical science and collective will that has inspired and enabled vast numbers of farmers in Cambodia to become more empowered and productive contributors to their country’s economic growth. He founded the Cambodian Center for Study

and Development in Agriculture (CEDAC) in 1997, which is currently the largest agricultural and rural development nongovernmental group in Cambodia. He noted that the project is now open for an investment opportunity to 150 people who wish to support funds in the project, which will gain a 50 percent return on investment after six years.

Kim Chhe, an officer in charge of the project, told Khmer Times yesterday the project is now being tailored and planting is expected to begin in September this year.

He said the project is estimated to cost from $3 to $5 million and that amount will be expanded when a processing facility is installed.

“I think people will prefer organic rather than chemically-treated fruit although the price is different. We also have considered exporting the fruit to Vietnam and China,” he said.

Dragon fruit is among a list of the agricultural goods that the Cambodia government and Chinese authorities are working on to meet China’s stringent sanitary and phytosanitary (SPS) requirements. It is hoped to export the fruit to the Chinese market soon.

Listed company Honng Anh Gia Lai Agrico (HAGL Agrico), a Vietnam conglomerate firm, invested in 8,000 hectares of land – at a cost of $400 million – planting different type of fruit which include dragon fruit and bananas from Ratanakiri province’s Koun Mom district, in northeast Cambodia, where it shares a border with Vietnam and Laos. Its market destination is China.

The Dragon Fruit Association in Southern Vietnam’s Long An province recently reported that it exports 50 tonnes of dragon fruit a day on average to China and other Southeast Asian nations.