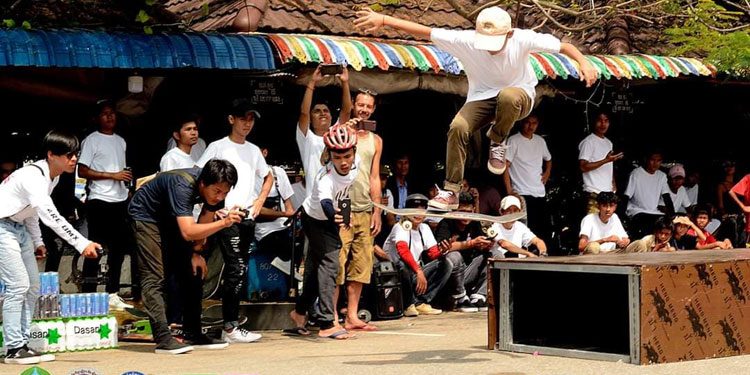 Of the 44, 17 were in the category roller marathon (10 kilometres), 12 in street skateboard, 12 in BMX freestyle, and three in scooter freestyle. There were also 10 judges for the event.

In BMX freestyle, On Panhatireach bagged the first place after garnering a total of 91 points. Second place went to Brak Soklinkimleng with 81 points. In third place came Soun Sok Rathana, who garnered 77 points. There were a total of 12 competitors in the BMX freestyle contest.

The first place in roller marathon (10km) was won by Phorn Meta, who finished the course in 28 minutes and 50 seconds. Not far behind in second place was Thol Nacy (29:20), while the third place went to Vong Chamroeun (30:52).

Ly Panhabot received 15 points to win the crown in street skateboard. He was followed by Sreang Sovanchettra with 14 points and Doung Chansovanrothanak with 12 points.

Mr Pisey said they have come up with the national rankings for each category after the event.

He said the success of the event is leading them to take more action to develop skateboarding and related disciplines.

Skateboarding, roller sports, and related disciplines are increasingly popular in this country of 16 million people. The work of Skateistan, an international NGO, and the recent visits to the Kingdom of American skateboarding legends Neftalie Williams and Tony Hawk helped popularise the sport.

The CSRSF, according to him, plans to raise funds for a professional skatepark and send players, coaches, and judges to train here and abroad. According to him, they also like to have their sports disciplines included in the upcoming 2023 Southeast Asian Games that Cambodia is hosting.