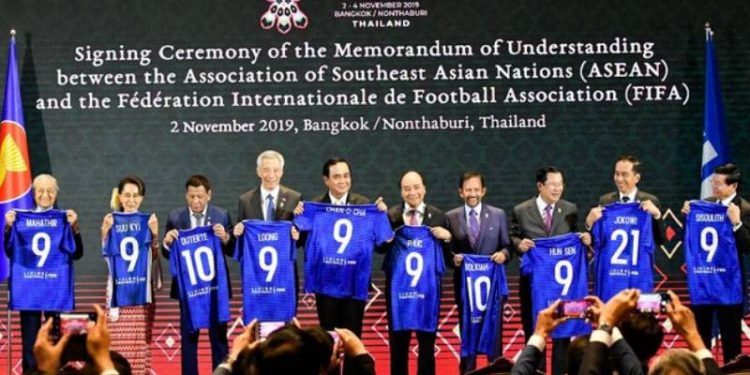 Leaders and delegates from 10 ASEAN nations witnessed the signing of a memorandum of understanding (MoU) on football collaboration with world football body Fifa after the 35th ASEAN Summit on Saturday (November 2) at Impact Forum, Muang Thong Thani.

The MoU aims to promote football in ASEAN at the regional and local levels in four aspects: sports integrity, sports for development, Fifa’s Football for Schools Programme, and professional capacity building, as well as the ambition of ASEAN nations applying to co-host the World Cup in 2034.

After the ceremony, Fifa president presented blue football jerseys to the ASEAN leaders and delegates with their numbers and their names on the back.

Seven leaders including Prime Minister Gen Prayut Chan-o-cha received No 9 jerseys, which is usually assigned to players in forward position, equivalent to their serving as prime ministers.

Sultan Hassanal Bolkiah of Brunei and Philippines president Rodrigo Duterte got No 10 jerseys, signifying team captain, in keeping with their status as head of state.

Meanwhile, Indonesian President Joko Widodo received the No 21 jersey, as Indonesia will be hosting the Under-20 World Cup in 2021.

This article was first published in The Nation / Asia News Network.