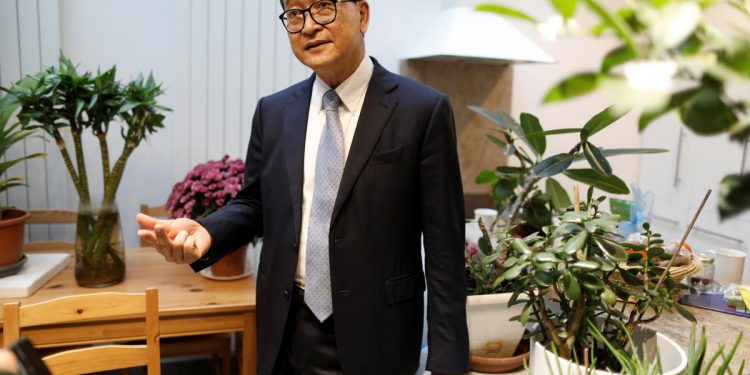 PHNOM PENH/PARIS (Reuters) – Self-exiled Cambodian opposition party founder Sam Rainsy said on Wednesday he would not be deterred by efforts to prevent his return home “to be with my people”.

Rainsy is set to fly to Bangkok from his Paris base on Thursday and has said he will be in Cambodia by Saturday. He could face arrest amid a crackdown at home on members of his banned party and Malaysia’s detention of two party activists also trying to return.

Thai authorities say he will not be allowed to transit their territory.

Rainsy, a former finance minister, has vowed to return to lead demonstrations against the one-party rule of longtime Prime Minister Hun Sen, whom he called “a brutal dictator”.

“I have to go back, return to my country because I want to be near my people, be with my people to lead them to fight for a better life,” he said.

Rainsy on Wednesday tweeted a photo of his airline ticket from Paris to Bangkok, from where he would travel to Thailand’s border crossing with Cambodia. Hun Sen has ordered airlines not to allow him to board flights into Phnom Penh.

His return could be thwarted by Thailand, whose prime minister said on Wednesday he would not be allowed entry en route to Cambodia.

“I hope there can be some arrangements, but if not, I will find some other ways and means to go back to my country,” Rainsy said. “If I cannot go to Bangkok I will board another plane for Kuala Lumpur, Jakarata or Singapore. Wherever I can go and where I can gather people to go with me.”

Hun Sen has accused the opposition of fomenting a coup, and his government has arrested at least 48 activists with Rainsy’s banned opposition party this year. The party’s last leader remains under house arrest on treason charges.

Rainsy fled to France four years ago following a conviction for criminal defamation. He also faces a five-year prison sentence in a separate case.

He denies wrongdoing and says the charges were politically motivated.

Thai Prime Minister Prayuth Chan-ocha said he could not allow interference into the internal affairs of Cambodia, a fellow member of the Association of Southeast Asian Nations (ASEAN).

“According to our commitment to ASEAN, we will not allow an anti-government person to use Thailand for activism,” Prayuth told reporters when asked about Rainsy.

“I have ordered this, so he probably won’t get in.”

Mu Sochua later flew to Indonesia, where the Cambodian embassy on Wednesday requested she be arrested after she attempted to hold a news conference.

Dozens of other opposition activists who fled Cambodia fearing arrest have vowed to return in support of Rainsy.

“There are only three possibilities about the fate of a political leader in Cambodia. Either they are killed, arrested and put in jail or forced into exile, but this time enough is enough,” Rainsy said.

“Life is not that long in front of me and I want the young people to enjoy a better life and I am determined to sacrifice my freedom and my life for democracy.”

This article was first published by Reuters. All images are copyright to their respective owners.