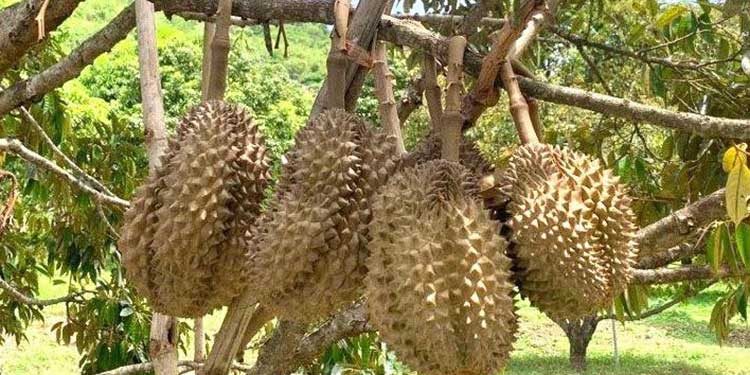 The Ministry of Agriculture, Forestry and Fisheries has boosted the farming of durians in Kampot province, a well-known province for one of the most recognised king of fruits in the country.

Mr Chan Rith, Director of Kampot Provincial Department of Agriculture, Forestry and Fisheries said that work has been carried out for years to boost the durian farming.

There are about 1,300 hectares of cultivation land of durians in Kampot province, of which 940 hectares have been harvested, he said.

According to Mr Rith, the total yield of durians in Kampot province is about 12,280 tonnes per year.

Besides Kampot province, durian is planted in the provinces of Kep, Kampong Cham, Koh Kong, and Battambang.

The durian season is short, running from June to July, which also pushes the prices of the fruit up.

Durian is an acquired taste. Some compare its foul-smelling flesh to the aroma of moldy socks and rotten eggs, but for fans it is the ‘king of fruits’.

This article was first published in Khmer Time. All contents and images are copyright to their respective owners and sources.