The opposition leader’s thwarted bid to return to the country is not without its costs, irrespective of whatever benefits it may generate. 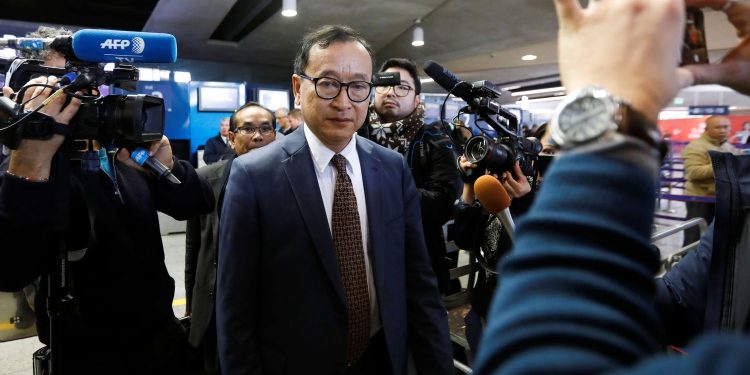 Cambodia's self-exiled opposition party founder Sam Rainsy, who has vowed to return to his home country, leaves after being prevented from checking-in for a flight from Paris to Bangkok at Roissy Airport in Paris, France November 7, 2019. REUTERS/Charles Platiau

A bid by Cambodia’s opposition leader in exile Sam Rainsy to return with a “tsunami of supporters” and oust Prime Minister Hun Sen ended in folly this weekend after Thai Airways did what was expected and denied him passage on a flight to Bangkok.

Earlier, Sam Rainsy had told his supporters that he would march from Thailand across the border to Cambodia and arrest Hun Sen, heralding a new era of democracy in a country that reverted to a one-party state at last year’s election. The Cambodian National Rescue Party (CNRP), co-founded by Sam Rainsy, was banned from contesting.

His much-vaunted return was no more than political theatrics that raised false hopes among his supporters. It also prompted troop deployments that disrupted travel and the start of the annual Water Festival when hundreds of thousands of people pour into the capital.

“The rapid increase in numbers of arrests and serious charges filed against CNRP members is alarming,” Rhona Smith, the UN Special Rapporteur on Human Rights in Cambodia, said.

Instead of the planned trip to Thailand, Sam Rainsy flew to Kuala Lumpur where his deputy Mu Sochua found sanctuary after Malaysia ignored a blacklist compiled by Phnom Penh.

On November 9, Independence Day in Cambodia, when he was due to cross the border, Sam Rainsy attempted to recast his messaging, claiming it was “not the final day for repatriation to Cambodia” but the next step in his bid to save the CNRP and revive democracy in Cambodia.

Sam Rainsy is a master at generating publicity. The real point of this exercise was to put his country under the international spotlight in the midst of several developments tied to Cambodia’s external relations, including the EU’s decision on trade preferences with Cambodia and U.S. consideration of moves such as the Cambodia Democracy Act.

Nor did Hun Sen’s coterie help themselves with their latest rounds of arrests and threats to international airlines who were told they risked complicity in an attempted coup if they flew Sam Rainsy into a neighboring country.

Such warnings did not sit well with the United States either. The Trump administration issued a statement warning the 10 members of the Association of Southeast Asian Nations (ASEAN) that Cambodian dissidents attempting to return home could face torture.

Sam Rainsy’s supporters have every right to be disappointed. He again made promises that he knew he could not deliver on, and those under arrest will bear the brunt of a state controlled by an angry few.

In an apparent concession, opposition leader Kem Sokha was released from house arrest on Sunday. But he is not allowed to leave the country or take part in politics and the treason charges against him remain. And his release may also mark a reemergence of divisions within Cambodia’s opposition, which the CPP has been keen to further sow.

This article was first published in The Diplomat. All contents and images are copyright to their respective owners and sources.