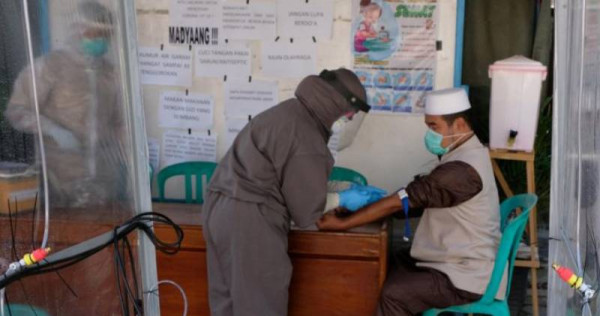 JAKARTA – The Central Java administration has formed a team to track down about 1,500 Central Java residents who attended a mass religious gathering in South Sulawesi, following the emergence of a Covid-19 cluster in the Brebes regency.

On Wednesday (May 6), 16 residents of Brebes who had in March attended an international gathering organised by Tabligh, an Islamic missionary group, in Gowa regency, South Sulawesi, tested positive for Covid-19.

Several other cities and regencies in Central Java have reported that people who had participated in the gathering had contracted the virus.

“I’m afraid there will be a new Covid-19 cluster from the attendees of the Gowa gathering,” Central Java Governor Ganjar Pranowo said on Thursday.

He called on residents who had attended the gathering to report to authorities for testing.

“Please help us by reporting to the authorities. Don’t be afraid; we won’t scold you. Instead, we will treat you – if you are confirmed positive for the coronavirus – to protect your families and others from transmission,” Mr Ganjar said.

The Tabligh gathering in Gowa was cancelled after intervention from the authorities, but not before more than 8,000 Muslim pilgrims, including more than 400 from the region and countries as far as Saudi Arabia, had already assembled in the provincial town.

Gowa is located 1½ hours by car from Makassar, the largest city in the country’s east.

Mr Ganjar said he has asked the Tegal city administration to create its own special team because of the city’s proximity to Brebes.

He asked the community group Jogo Tonggo to report if they found any of the gathering’s attendees in their records.

As of Thursday, Central Java had confirmed 904 cases of Covid-19 and 64 deaths.

Indonesia as a whole has reported 12,776 cases and 930 deaths from the highly contagious virus.

Meanwhile, Indonesia’s President Joko “Jokowi” Widodo has called on the public to continue following health protocols and large-scale social restrictions, or PSBB, despite claims that the rate of Covid-19 infection is on the decline.

“It is possible that the number of cases could go up and down, and so on. This means we have to live in peace with Covid-19 for the time being until we find an effective vaccine,” Jokowi said on Thursday.

He also said that people in Indonesia were lucky because the government chose to implement large-scale social restrictions instead of a total lockdown to prevent the virus from spreading.

“The PSBB allow the public to continue their daily activities, albeit with limitations. People also need to limit themselves, and refrain from gathering in large numbers,” Jokowi said.

He said he had received reports that people were gathering in crowds in several regions.

“It’s okay to carry out activities with limitations, but follow the health protocols,” he said. “(Dealing with the outbreak) requires discipline from all of us.”