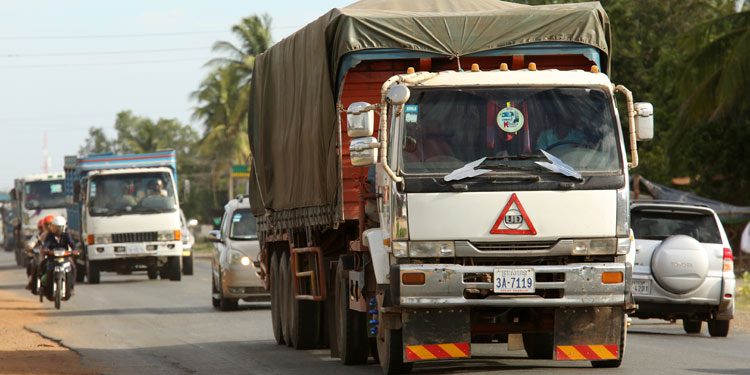 Chinese company China Good Cars Holding Ltd has announced a plan to invest $160 million in a heavy truck terminal on the outskirt of Phnom Penh in order to reduce traffic congestion in the city, according to the Ministry of Public Works and Transport.

The plan was announced during a meeting between Minister Sun Chanthol and a representative of China Good Cars Holding Ltd in the capital.

In the first phase, the company wants to build the modern heavy truck station and public transportation service by bus, connecting city the outskirts and provinces near Phnom Penh, according to the Ministry.

Previously, the government put in place a public city bus and water-taxi service to ease traffic congestion. However, the services have now temporarily closed amid the COVID-19 outbreak.

Chanthol said the company needs to ask approval from the Council for the Development of Cambodia (CDC) to obtain an exemption in accordance with the Kingdom’s investment laws.

The company has pledged to follow the ministry guidelines to achieve the investment goal.

of The Cambodia Logistics Association (CLA), also welcomed the plan, saying that it is time to move heavy truck parking outside the capital to reduce traffic jams.

“It is good to have investment in a heavy truck station right now,” he said. “We did prepare this 10 years ago but it was not successful because drivers refused to park there. Now it is time to make it happen to reduce traffic jams.”

According to Chanthy, the viral pandemic has reduced goods transportation by up to 70 percent.

In 2018, City Hall restricted heavy trucks from transporting goods during the day time to reduce traffic jams in the capital.

However, City Hall is now temporarily allowing trucks to transport goods during the daytime in the capital to facilitate the much-needed flow of raw materials from Sihanoukville to garment factories base in Phnom Penh.

Cambodia to export fresh food to S. Korea by end of June 2020