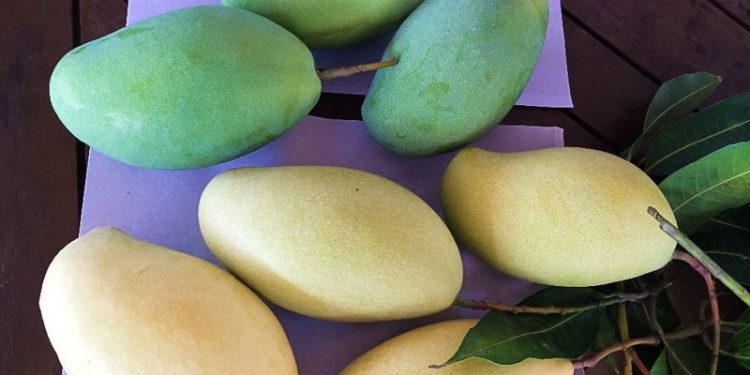 China could become the biggest market for Cambodian mangoes if exports of the product are greenlighted, a senior Cambodian official said yesterday.

The process of approving shipments of Cambodian mangoes to the Chinese market is ongoing, with a delegation of Chinese officials recently visiting mango farms in the Kingdom to conduct inspections.

If shipments are approved, China would become the biggest buyer of Cambodia’s mangoes, said Ngin Chhay, director general of agriculture at the Ministry of Agriculture, Forestry, and Fisheries.

Mr Chhay was speaking at a press conference on mango exports held yesterday at the Council of Ministers.

He noted that mango shipments will not be approved by Chinese authorities unless significant investment goes into building processing and packaging facilities, noting that the country is in dire need of vapor heat treatment facilities.

“Cambodia has great mangoes but we cannot export them to China, which is the biggest market for this product,” Mr Chhay lamented. “We urge the private sector to invest in the sector and build the necessary treatment facilities.”

He said a few companies have expressed interest in investing in the sector, particularly since officials from China’s General Administration of Quality Supervision, Inspection and Quarantine (AQSIQ) inspected mango farms earlier this year and gave a generally positive review of the facilities.

Chinese officials will conduct a second round of inspections on Cambodian farms in the near future, Mr Chhay said, noting that in their first visit, the Chinese experts were satisfied with the quality of the mangoes but were unhappy with sanitation.

“New inspections will be carried out soon by Chinese officials. We are prepared and have been working to improve the issues that were highlighted during their first visit,” Mr Chhay said.

There are over 100,000 hectares of land planted with mango trees in Cambodia, mostly in Kampong Speu, Kampot, Battambang, and Banteay Meanchey provinces.

The variety known as Keo Romeat is the most popular for export, Mr Chhay said, noting that there are 36 varieties in total.

In Chayvan, president of the Kampong Speu Mango Association, said Cambodia generally exports the fruit in its raw form because there are no facilities in the Kingdom to process it.

“We lack packaging and processing facilities, so farmers have to sell their mangoes to traders who export them to neighboring countries,” Mr Chayvan said.

The first shipment of Cambodian mangoes to South Korea is planned for early next year.

Hyundai Agro will carry out the shipment, which was made possible after the signing of a memorandum of understanding on mango exports between Korea and Cambodia in 2015.