Hun Sen and the European Union are in a high stakes, high-risk game of poker and it's not clear who holds the winning hand. 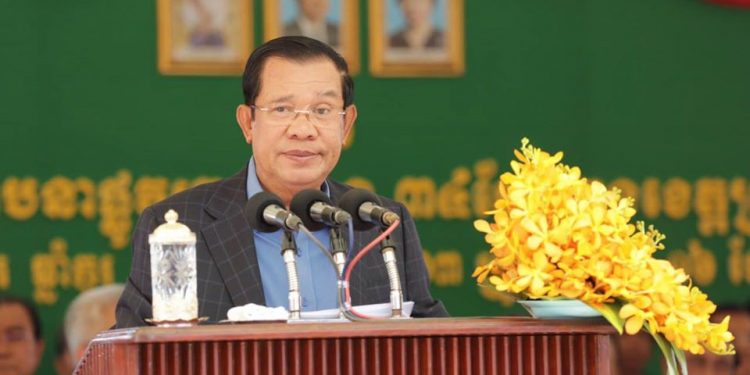 It looks like the European Union has Hun Sen exactly where it wants him.

The Cambodian Prime Minister has one month to explain what he will do to address human rights violations or risk losing preferential access to the European market that is vital to Cambodia’s garment industry.

Brussels bureaucrats are hoping fervently he will see sense. Many of Cambodia’s neighbours would also breathe a sigh of relief. But long-time observers warn that the  67-year-old Hun Sen has been in tight spots before during his 34 years in power and always managed to find a way out.

“He is incredibly clever; very skilled at buying time and coming up with half measures that satisfy external and internal constituencies as well,” says Aaron Connelly, research fellow in south-east Asian political change and foreign policy at the International Institute for Strategic Studies in Singapore.

On Tuesday, the Cambodian government took delivery of the EU’s draft findings after an investigation to determine  whether there had been “serious and systematic violation of principles” set out in human and labour rights conventions. If so, EU rules state trade preferences can be suspended, specifically the Everything but Arms program that means no quotas and no tariffs on all exports except arms and ammunition.

Cambodia – which is the second-biggest beneficiary of the EBA, exporting goods worth €5.3 billion ($8.5 billion) to the EU last year, including €4 billion in clothing and textiles – has until December 12 to respond to the draft report.

The hope is it will choose to follow up on the recent softening of its treatment of opposition leader Kem Sokha, who was released from house arrest a week ago, with more concessions. If the EU deems it has not made a big enough effort, come February it will recommend Cambodia lose EBA access.

So, will Cambodia – which in recent years has outlawed the opposition party, closed down independent media and arrested many who oppose Hun Sen – do just enough to give the EU an out? Connelly thinks so, and observes that would be the best result for Brussels.

The EBA suspension threat is a “a one-shot bullet and one you don’t want to use because if you do and it doesn’t work, you have no leverage”, he says.

And then there is the China factor.

China is pouring money into Cambodia and, in return, Cambodia is doing much to further China’s interests in the region – including reportedly offering access to a naval base. While some say this view of Cambodia as China’s pawn has been overdone, there is no doubt it helps Hun Sen to have a powerful friend. Just as it helps that his domestic opposition is weak.

The blatant human rights violations that include treason charges against Kem Sokha have become the dominating narrative of the opposition Cambodia National Rescue Party in recent years. They have also obscured the deep rifts within the party, particularly between Kem Sokha and and CNRP co-founder Sam Rainsy.

In recent weeks, Sam Rainsy – who fled Cambodia in 2015 – has attracted headlines across various nations and continents after declaring he would return to Cambodia on the nation’s Independence Day, November 9. His plan to cross over from Thailand was foiled when Thai Airways, acting on instructions from the Cambodian government, refused to let him board. So he flew to Malaysia instead. By Thursday he was in Jakarta, his entry into Indonesia quietly assisted by some sympathetic MPs.

Sam Rainsy is not a shy man and his propensity for media conferences has sorely tested the patience of governments, which subscribe to the principle of non-interference in other ASEAN nations’ domestic affairs.

“The Indonesian government wants to have good relations with other ASEAN countries, so we are very careful about not commenting on the affairs of others,” says Hikmahanto Juwana, professor of international law at the University of Indonesia.

“We see this as a domestic issue for Cambodia. We understand some ASEAN countries do not have the level of democracy Indonesia has, and of course we want to encourage this in other countries, but it is a matter of sovereignty and jurisdiction. So the government is very careful to not push too hard on this issue.”

ASEAN members wax and wane to some extent when it comes to non-interference, says Ben Bland, research fellow and director of the Southeast Asia project at the Lowy Institute, but there is an underlying and durable element of self-interest involved that also helps preserve stability across the region.

“ASEAN nations view this principle in a defensive sense. It’s not just an idea, something written into ASEAN; it’s also seen as a way to stop other countries in the region being used as a base to destabilise them,” Bland says.

“While this is not really in line with the human rights aspirations in ASEAN, it is effective in that we don’t see in south-east Asia what we see in the Gulf or the Middle East, where many countries actively work to destabilise their neighbours.”

So when Sam Rainsy told reporters in Jakarta on Thursday that he hoped he could return to his country soon as a result of the pressure European countries were putting on Cambodia, many ASEAN nations must be wishing much the same. But hopes that a triumphant return home by Sam Rainsy and other CNRP figures would be the beginning of the end for Hun Sen are probably misplaced. It is not an opposition party that is ready for government, says Lee Morgenbesser, senior lecturer at Griffith University’s school of government and international relations.

“The CNRP has not done what a lot of other opposition parties working in autocratic regimes have done to help oust a dictator like Hun Sen. And in the last couple of years the organisation has been completely crippled, especially this year with all the arrests of CNRP members and junior leaders.”

And then there is the rivalry between Kem Sokha and Sam Rainsy. Kem Sokha’s release from house arrest was no doubt intended to win favour with the EU, but Hun Sen is no doubt well aware of the factionalism and tensions in the CNRP.

In any case, Morgenbesser does not think Hun Sen has done – or will do – enough to avoid EU sanctions. This will have an immediate impact on Cambodia’s garment industry, albeit one that’s difficult to quantify. Morgenbesser believes the workers affected will blame the government for job losses, and this will create problems for Hun Sen. But again, not enough for a knock-out blow.

The one factor that Hun Sen cannot do anything about is demographics.

“The youth are far more educated, far more informed via social media and much more keen on democracy. So there is a potential powder keg there, waiting to explode,” says Morgenbesser. “It’s just a matter of what the catalyst will be. For now, I don’t see too much vulnerability.”

This article was first published in Financial Times. All contents and images are copyright to their respective owners and sources.