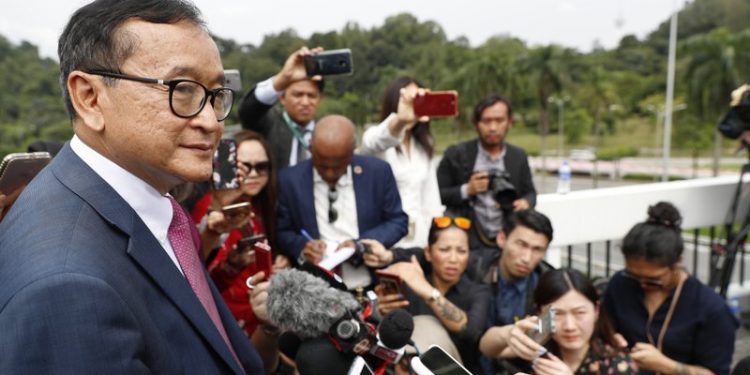 Cambodia's exiled opposition leader Sam Rainsy talks to the media outside Parliament House in Kuala Lumpur, Malaysia, Tuesday, Nov. 12, 2019. Rainsy landed in Kuala Lumpur in a bid to return to his homeland after Thailand had earlier blocked him from entering. (AP Photo/Vincent Thian)

Exiled Cambodian opposition leader Sam Rainsy arrived Thursday in Indonesia to meet some of the country’s lawmakers as he considers when and how to make his long-awaited return to his homeland.

Sam Rainsy, head of the banned Cambodia National Rescue Party, flew in from Malaysia after failing to make his planned return to Cambodia on Saturday. He was barred by Cambodian authorities who also won cooperation from some neighboring countries and airlines to hinder his freedom of movement.

On arrival in Jakarta he said that he would meet some Indonesian lawmakers and civil society groups during his visit. He said he intends to return to Cambodia at the earliest possible opportunity to continue his mission to lead a nonviolent movement to unseat Cambodian’s long-serving authoritarian prime minister, Hun Sen.

Cambodian Deputy Prime Minister Sar Kheng said on Saturday after Sam Rainsy failed to return that he would now be allowed to enter the country, but would have to face justice for several convictions and pending court cases, all of which Sam Rainsy says are politically motivated.

However, the opposition leader still faces trouble traveling in the region. Thailand, from which he had intended to cross by land into Cambodia, barred his entry.

Although he was admitted to Malaysia, it was only after negotiations about his stay. He did not fly as scheduled to Jakarta on Wednesday, with Malaysian Airlines initially saying it would not carry him because Indonesian authorities had advised them not to.

Indonesian immigration officials said he was not barred from entry, and the airline later changed its story. Sam Rainsy would say only that he missed his flight.

“They don’t want me to come to Cambodia. The government,” he replied when a reporter asked why he was being deterred from returning. “Why is he (Hun Sen) afraid of me? I have bare hands. I have no weapons. I have no arms. I have no money. I just have two colleagues with me. So, why are they so afraid of me?”

His said his message to the Cambodian people was: “Keep up the hope. Keep up the fight. Democracy will prevail.”

Asked when he would return to Cambodia, he told reporters it could be “anytime.”

“Maybe tomorrow, maybe the day after tomorrow,” he said. “Anytime because the situation in Cambodia can change very quickly.”

In Cambodia, Hun Sen said Thursday that he had ordered the Justice Ministry to work with the courts to arrange the release on bail of scores of opposition supporters who were arrested in the run-up to Sam Rainsy’s planned return.

He said their release would have conditions attached: the charges against them would not be dropped, they could not leave the country, and they have to show up whenever requested by the authorities.

“This task is importantly needed for the sake of national unity, for the sake of maintaining peace and safety for the entire people, because those people were deceived by their leader.” Hun Sen said in a speech at the opening of a cement factory in southern Kampot province.

He also repeated his frequent assertion that he intended to remain prime minister until 2028. He has already held power for 34 years.

Hun Sen said that he would not ask King Norodon Sihamoni to grant Sam Rainsy a pardon, though he did not mention the opposition leader by name. Other exiled opposition members would be welcome to return without being arrested or charged, he said.

His speech came a day after his government declared it had “fully defeated” plans by Sam Rainsy and his colleagues to topple his government.

The co-leader of the Cambodia National Rescue Party, Kem Sokha, was release from house arrest Sunday in what is seen as a move to win favor from the European Union, which is considering taking away preferential trade terms for Cambodian imports because of Cambodia’s poor record on labor and human rights. The EU is supposed to issue its final decision in February.