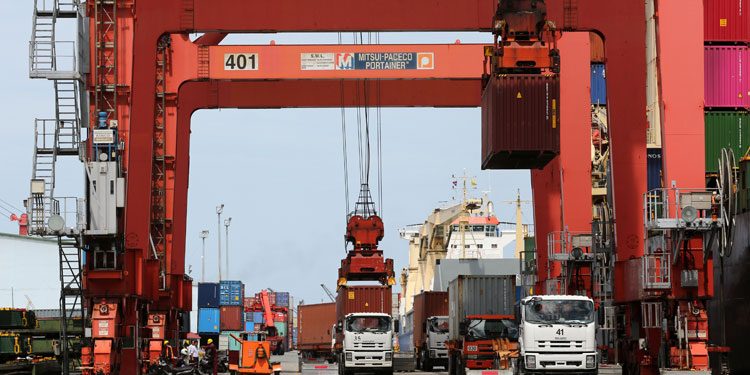 The two-way trade of Cambodia with Vietnam experienced a decrease during the first quarter of the year caused by the global pandemic. However, the trade volume with Thailand remained steady.

From January to March, the bilateral trade between the two countries stood at $1.3 billion, down 8.2 percent over the corresponding period last year, according to a figure from the Embassy of Vietnam to Cambodia released last week.

It noted that during the period, Vietnam imported to Cambodia was valued at roughly $1 billion, up 4.4 percent. In contrast, the amount Cambodia exported to the country reached $272 million, a 37 percent decrease.

As of 2019, trade volume between the countries recorded more than $5.2 billion, an increase of 12 percent compared with 2018. The trade figure already hit the target, which the two governments committed to increasing trade volume by reaching $5 billion by 2020.

Another report released by the Foreign Investment Agency under the Ministry of Planning and Investment in Vietnam, however, stated that Cambodia was recorded as the third largest recipient of Vietnamese investment during the first quarter of this year, with investment totalling $9.5 million – 19.3 percent.

With Thailand, despite having the border restriction still in placeby COVID-19, Cambodia’s exports to the country continued to increase during the first quarter of the year.

According to data from Thailand’s Ministry of Commerce the bilateral trade between the Kingdoms in the first three months was valued at $2.5 billion, a 31 percent hike over same period last year.

During the period, Cambodia’s total exports to Thailand reached $612 million, a 115 percent increase, while Cambodia imported from Thailand $1,891 million of goods, a 17 percent increase over the corresponding period last year.

UK economy ‘to plunge 14 percent this year on virus’