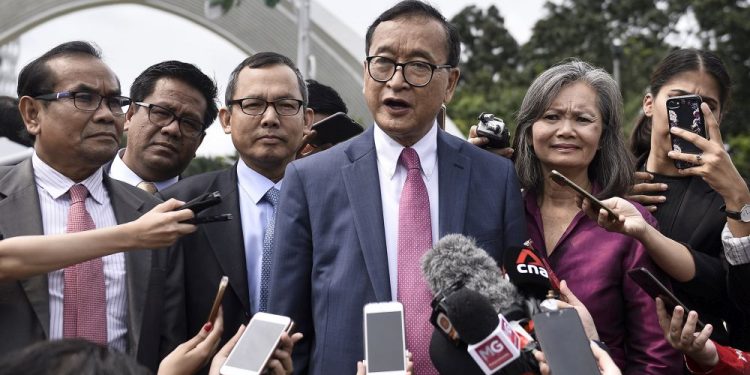 Ramsy said his invitation to Malaysia’s Parliament today gave positive signals to the people of Cambodia who he claims want democratic rights over the current government.

“The very fact that we were received by Members of Parliament (MP) in the Parliament building is very meaningful it means there are MPs from Malaysia from all political parties who support democracy in Cambodia.

“This is a message for Cambodians. The Cambodian people must be happy today, must be very grateful to the Malaysian people and MPs,” he told reporters outside of Parliament building.

Rainsy, who is the co-founder of the Cambodia National Rescue Party (CNRP) faces imprisonment in Cambodia for conviction on criminal charges that he maintains are politically motivated.

He said he was grateful to the Malaysian government and authorities for allowing them to enter Malaysia despite being blocked from entering other neighbouring countries such as Thailand, and attempts by the Cambodian government to restrict their movement.

Rainsy said he will be here for a few days as he has meetings with civil society groups.

He is still seeking a way to return to Cambodia which he left for France four years ago.

“Here in Malaysia we have many friends and like-minded people. We will find another way back to Cambodia. I will be staying in this region. The situation can change very quickly. I will go back to Cambodia when there is a possibility to do so,” he said.

Rainsy said the current development in Cambodia have shown that it could only be a matter of time before he returns in a popular uprising of the people against Hun Sen, who is the premier leader in Cambodia since 1985 after the country emerged from a bloody civil war and invasion from Vietnam.

“There are indications that the (ban) measure against us can be temporary or partially lifted,” he said.

Rainsy who is accompanied by his deputy, Mu Sochua arrived at Parliament at 11am. They headed to the Parliament Briefing Room together with several Backbenchers MP from the Pakatan Harapan coalition led by Permatang Pauh MP from Nurul Izzah Anwar.

Rainsy who was a former Cambodian Minister of Economy and Finance in 1993-1995 went into exile on February 3, 2005, citing fear of arrest after a vote in the National Assembly removed parliamentary immunity from himself and fellow MPs Chea Poch and Cheam Channy.

Rainsy faced multiple criminal defamation charges after accusing the Cambodian People’s Party and Funcinpec of corruption in the formation of the current coalition government. He has also accused Prime Minister Hun Sen of involvement in the 2004 murder of SRP-affiliated union leader Chea Vichea.

On Sunday, Cambodia freed a prominent opposition figure Kem Sokha from house arrest more than two years after he was charged with treason, after attempts by his colleagues to return to the country were thwarted.

Kem Sokha was arrested in 2017 and accused of plotting to overthrow the Cambodian government.

He was sent to a remote prison, then confined to his house and the surrounding block and was prohibited from talking to the media.

This article was first published in Malay Mail. All contents and images are copyright to their respective owners and sources.