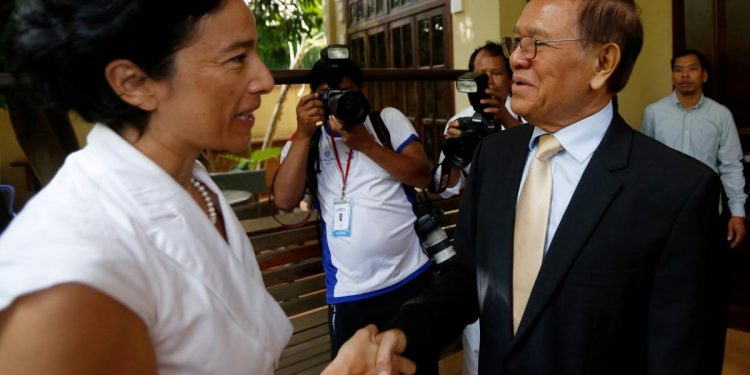 PHNOM PENH (Reuters) – Cambodian opposition leader Kem Sokha met the French ambassador on Monday after his house arrest was lifted, although he remains charged with treason and is banned from politics and leaving the country.

Sokha greeted Ambassador Eva Nguyen Binh outside his home before going inside for talks. They made no statement after the meeting.

Sokha’s house arrest was lifted as the European Union considers whether to cut preferential trade terms with Cambodia after a crackdown by Prime Minister Hun Sen, who has ruled with an iron grip for more than three decades.

It also came days after self-exiled opposition party founder Sam Rainsy increased public scrutiny on Hun Sen in a high-profile return to the region from Paris. He had said he would go to Cambodia despite facing arrest on a criminal defamation conviction, but stopped in Malaysia, where he said he was rallying support.

Cambodian authorities have arrested about 50 of Sokha’s banned opposition party supporters and other activists this year, accusing them of plotting a coup to overthrow Hun Sen.

Sokha, 66, was arrested in 2017 and his Cambodia National Rescue Party (CNRP) was dissolved by the Supreme Court in the run-up to last year’s general election.

Hun Sen’s ruling party went on to win every seat in parliament in the vote.

“As an innocent person who has been jailed for two years, I continue to demand that the charges against me be dropped,” Sokha said in a Facebook post on Sunday after house arrest was lifted.

“I expect today’s decision to be the first step, but I, as well as many other Cambodians who have lost political freedom, still need real solutions and justice.”

Sokha was accused of plotting with foreigners to oust Hun Sen – a charge he dismissed as nonsense.

The Phnom Penh Municipal Court said in a statement that Kem Sokha could leave his house, but that he could not engage in political activity or leave the country.

The crackdown on Cambodia’s opposition prompted the European Union to reconsider trade preferences granted under an “Everything But Arms” (EBA) trade program for least-developed countries.

It is due to receive a preliminary determination on Tuesday on the EBA and Cambodia’s human rights situation.

The EU accounts for more than one-third of Cambodia’s exports, including garments, footwear and bicycles.

This article was first published in REUTERS. All contents and images are copyright to their respective owners and sources.