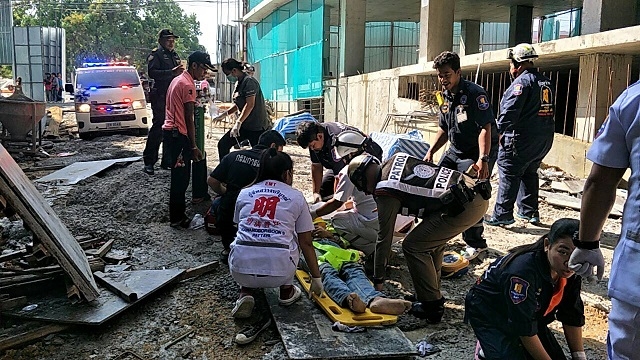 A Cambodian worker has been killed and three others seriously injured after scaffolding collapsed at a luxury condo construction site in Pattaya.

The accident happened yesterday in Bang Lamung district and caused the four workers to plunge several stories to the ground.

The workers were rushed to hospital, with the most seriously injured, a 20 year old man identified only as Ton, succumbing to his injuries. The other injured workers are reported to be two 18 year old men and a 19 year old woman. All are believed to be Cambodian nationals.

Bang Lamung superintendent Pol Colonel Chakthip Parapanthakul suspects the scaffolding, which protruded two metres from the building and on which the workers were standing, collapsed due to being overloaded with metal rods.

He adds that a full investigation will be carried out to determine the cause and to check that the migrant workers have legal work and residency status, which will help in any legal action they may take.

Freshwater dolphins in the Mekong are benefiting from better protection