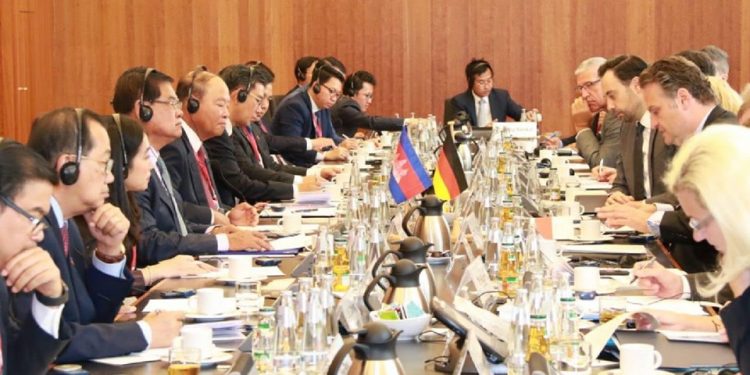 Minister of Interior Sar Kheng told the German government that the Kingdom wanted good relations with the European Union and retain the Everything-but-arms trade status.

Mr Kheng has led a high-level delegation to Germany from September 24 to strengthen development cooperation and study its public administration system.

According to a Ministry of Interior statement, during his stay in Berlin Mr Kheng met with Gisela Hammerschmidt, Director for Asia at the German Federal Ministry for Economic Cooperation and Development; and German Bundestag’s Committee where he told German politician about the EBA scheme.

“Interior Minister Sar Kheng has informed the leaders of the Bundestag and its committees about EBA resolutions with the European Union,” the statement said.

“He emphasied that Cambodia wants to keep the trade preference and also maintain good relations with the European Union and all other countries,”

Mr Kheng said Cambodia has learned from the past experience regarding the regime change that can push the country into civil wars.

“Cambodia knows clearly that there are only liberal multi-party democracy principle like today that makes the Kingdom peace and development,” Mr Kheng added.

The government has made moves to appease the EU and prevent revocation of the EBA by paving the way for banned former opposition party members to return to the political arena, but the move was not deemed enough.

In meeting Ms Gisela also praises the Kingdom regarding result of the government promotes reform in the field of anti-corruption, legislative and judicial reform, public finance administration reform, and administrative reform.