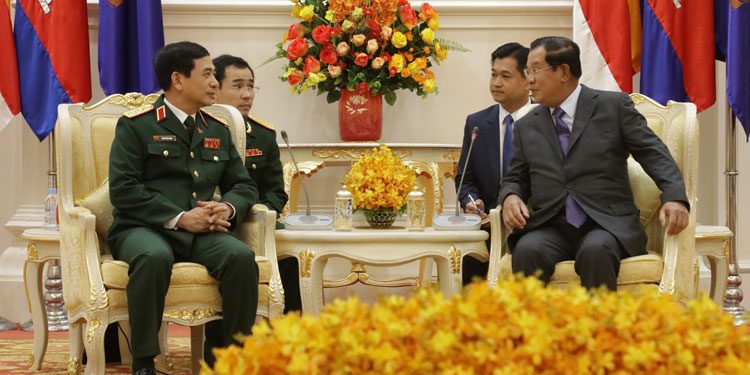 A joint military exercise on disaster rescue will be conducted along the border in Svay Rieng province and Vietnam’s Long An province in December, an official said yesterday.

Speaking to reporters after a meeting between Prime Minister Hun Sen and Lieutenant General Phan Van Giang, Chief of the General Staff of the Vietnam People’s Army and Deputy Defence Minister, Eang Sophalleth, personal assistant to Mr Hun Sen, said that Cambodia and Vietnam will hold a disaster rescue exercise in December.

“The military exercise on disaster rescue will be conducted in December,” Mr Sophalleth said, noting it will focus on security, and public order along the border and a search for Vietnamese remains during the 1980s.

He said that Mr Hun Sen noted that he was happy that the Kingdom’s and Vietnam’s military ties have been good, noting people of both nations live peacefully along the borders.

Mr Sophalleth said that Mr Hun Sen told Lt Gen Van Giang that the exercise is crucial because once natural disasters, including forest fire and flooding, occur, quick rescue measures must be in place.

He said Mr Hun Sen noted the exercise will encourage Cambodian and Vietnamese people to help each other.