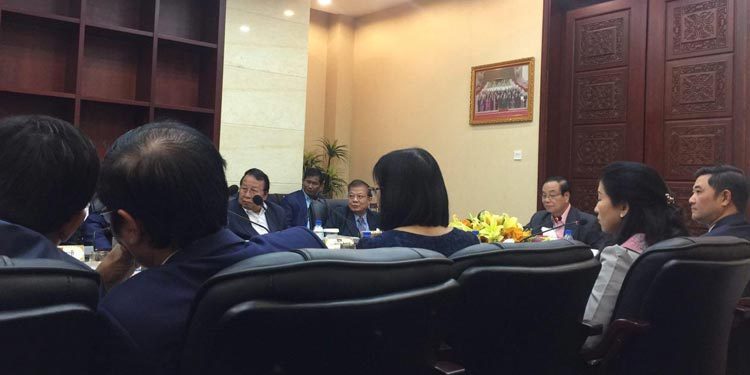 Prime Minister Hun Sen has received support from the international community for Cambodia to host the Asia Pacific Summit from November 18 to 21 in Phnom Penh and the event will focus on the theme of “Responding to the Current Key Challenges: Interdependence, National Reconciliation Mutual Prosperity and Universal Values”.

Ek Tha, vice-chairman of the Government Spokesperson Unit, said the summit will be attended by leaders, including heads of state, government heads, National Assembly presidents, Senate presidents, ministers, former heads of state and government heads from more than 50 countries, as well as the representatives from the private sector, artists, and youth of more than 150 countries.

The Universal Peace Federation, a non-governmental organisation working as the consultant with the United Nations Economic and Social Council, also joined to coordinate in the process of the summit.

In order to make the event of the summit successful, the Prime Minister has appointed Deputy Prime Minister Bin Chhin, Minister in Charge of the Council of Ministers, as chairman of the Inter-Ministerial Committee for the organisation of the Asia Pacific Summit in 2019 in Cambodia.

The committee also has three vice chairmen, including Culture and Fine Arts Minister Phoeurng Sackona, Tourism Minister Thong Khon, and secretary of state for the Council of Ministers Kim Roth Viseth. The committee also has members from all 20 relevant ministries involved in the preparation of the summit process.

Mr Bin Chhin, in a working meeting with representatives of the vice chairmen and members of the Inter-Ministerial Committee on September 19, said that hospitality is important.

He also requested the Secretariat, led by Mr Roth Viseth, to establish six sub-committees to facilitate the work in the summit process in order for it to be as successful as past events, when Cambodia hosted summits such as for the Association of Southeast Asian Nations, World Heritage Committee, Asian Cultural Council and other meetings.

Cambodia has integrated itself into globalised society, including by becoming a member of Asean in 1999 and the World Trade Organisation in 2004, as well as many achievements through the integration of Cambodia at the regional and international levels.

The government, with foreign policy as a good friend, has attracted foreign investors to invest in the country, as well as local investors, worth $5 to $6 billion a year, and has created thousands of jobs as well. At the same time, Cambodia has exported its goods to international markets worth billions of dollars each year.

Along with a sustainable development, Cambodia has also contributed to the maintenance of world peace through sending its forces under the United Nations umbrella.

These factors have enabled Cambodia to gain the support from the international community, including through testimony that Cambodia has hosted many summits and world-class meetings, as well as at the time that the Universal Peace Federation (UPF), a consultative institution of the United Nations Economic and Social Council, with its branch networks in more than 150 countries, also focus on building peace, addressing disputes, strengthening marriages, families, youth and services that contribute to harmony in the nation.

At the Asia Pacific Summit in November, the Prime Minister will also have bilateral meetings with heads of state and heads of government who attend the summit.