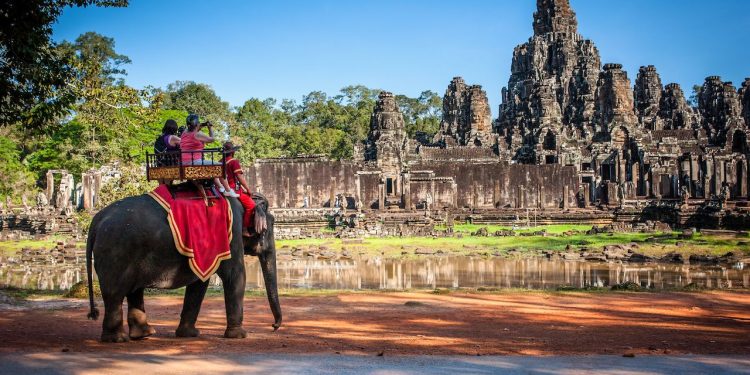 Elephants that serve as tourist attractions at Cambodia’s famous Angkor Wat temple complex are to be moved to a new home in a suitable jungle area.

The Apsara Authority and Elephant Management Association has started transferring elephants in the Angkor Wat area to Bos Thom community forest in Siem Reap province’s Sout Nikom district in a bid to stop the animals from being used to ferry tourists around.

Long Kosal, Apsara Authority spokesman, yesterday said that for several years elephants have been used to serve the tourism sector in the Angkor area.

He said that to promote the well-being of the animals and allow them to live in their natural environment, the Elephant Management Association, in cooperation with the Apsara Authority, is gradually transporting elephants out of the Angkor area.

“The elephant is a big animal, but it is also gentle and we don’t want to see the animals being used for tourism activities anymore,” Mr Kosal noted. “We want them to live in their natural surroundings.”

He said that out of 14 elephants in the Angkor Archaeological Park, two were yesterday transported to the Bos Thom community forest in Sout Nikom district’s Khnar Por commune in order for them to live naturally and under the care of the Elephant Management Association.

“The remaining elephants will be gradually transported and we expect the exercise to finish by early next year,” Mr Kosal said.

Ly Huoch, a resident of Siem Reap province who has seen elephants being used to transport tourists at Phnom Bakheng in Angkor area, lauded the decision to stop the activity.

He noted that the animals are used to carry tourists for sightseeing or climbing mountains almost daily.

“I support the decision to transfer them because the elephants are working so hard and should be free. I feel sorry for the elephants,” Mr Huoch said.

In 2016, an elephant named Sambo which had been ferrying tourists at Bakheng temple, collapsed and died due to heart attack during extremely hot weather conditions.

According to a report issued by the Environment Ministry last year, the Asian elephant has been listed as an endangered species by the International Union for Conservation of Nature.

It said that according to the World Wildlife Fund, Cambodia is considered as a refuge to ensure the continued survival of elephants in Indochina.

The ministry said there are now between 400 and 600 elephants in the Kingdom and very few in neighbouring countries.

“Therefore, in order to maintain the presence of elephants in Cambodia, conservation is necessary and very important,” it noted.