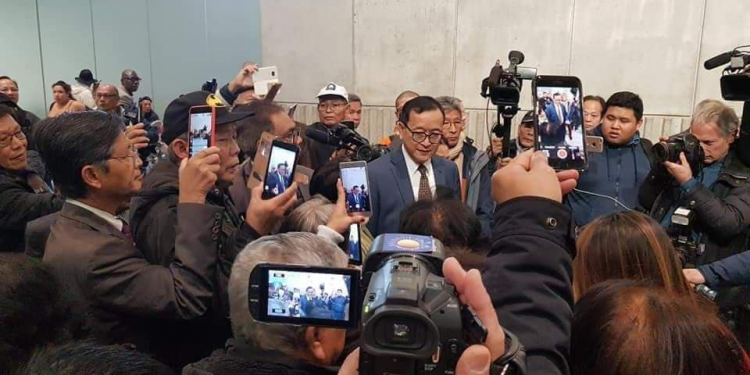 PHNOM PENH, Cambodia (AP) — Cambodia’s government claimed victory Wednesday in its jousting with exiled opposition leader Sam Rainsy, who was unable to meet his self-imposed deadline to return to the country in an attempt to oust Prime Minister Hun Sen.

A government statement Wednesday night said it had fully defeated what it called an attempted coup d’etat by “rebel” Sam Rainsy.

It said that public order and security had been firmly assured throughout the country.

Sam Rainsy had said he and exiled colleagues from his banned Cambodia National Rescue Party would return Saturday to lead a nonviolent mass movement to unseat Hun Sen, who has held power for 34 years.

Hun Sen’s government barred his entry and advised airlines and neighboring countries to block his travel. He was allowed into Malaysia, and says he still plans to return home, though he has not set a date.

Sam Rainsy appeared to still have trouble traveling Wednesday, when he did not fly to Indonesia as scheduled. He said on social media that he had missed his flight and had rescheduled it for Thursday. Malaysia Airlines unofficially said he had been barred from boarding a flight on the request of Indonesian authorities, then later said he had not been barred. Indonesian immigration office spokesman Sam Fernando earlier said there was no “prohibited person to enter” instruction or arrival blacklist with Sam Rainsy’s name.

In a turnaround, Cambodian Deputy Prime Minister Sar Kheng said on Saturday after Sam Rainsy failed to return that he would now be allowed to enter the country, but would have to face several convictions and pending court cases, all of which Sam Rainsy says are politically motivated.

Wednesday’s government statement said a small number of people remain deceived by Sam Rainsy and his group, including some inside Cambodia and others abroad.

“The government would like to appeal to them to come back and stop believing Sam Rainsy and his group, and they can live freely and enjoy life with their families without fear of reprisal by the government,” it said.

Cambodia mobilized its security forces and arrested scores of opposition supporters in its effort to thwart Sam Rainsy’s return, which was intended to be by land across the border with Thailand. Thailand virtually scuttled any chance of a timely return when its prime minister, Prayuth Chan-ocha, said the opposition leader would not be allowed to transit because the neighbors have a policy of noninterference in each other’s domestic affairs.

Sam Rainsy has been in exile since 2015 to avoid prison time on a defamation conviction. The opposition party’s co-leader, Kem Sokha, remained in Cambodia and endured constant government harassment, culminating in his September 2017 arrest on a treason charge widely seen as spurious. He was released from house arrest on Sunday. He has not been tried and the charges against him are still active, and he is barred from leaving the country and engaging in political activities.

The two party leaders are rivals as well as allies, and Sam Rainsy’s extended stay in exile, despite repeated vows to return, has hurt his credibility and widened the differences between the two men. Hun Sen has a reputation as a wily politician who has used divide-and-rule tactics against his opponents.

Sam Rainsy has been Hun Sen’s bitter political enemy for years, as well as his most popular rival. The two men have traded barbs in speeches and on social media, and even openly vied for bragging rights on who had the most Facebook friends.