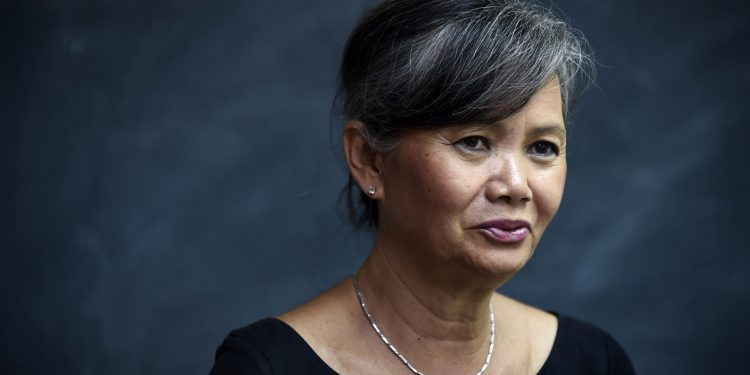 This picture taken on October 5, 2017 shows Cambodia National Rescue Party (CNRP) deputy party leader Mu Sochua posing for a photograph at an undisclosed location in Bangkok. Two late-night text messages in an hour, one from sources in the military, the other from the cops, warned Cambodian opposition politician Mu Sochua her arrest was at hand. The next day she bolted from the country, joining half of the kingdom's opposition lawmakers in self-exile. / AFP PHOTO / Lillian SUWANRUMPHA / TO GO WITH Cambodia-politics, INTERVIEW by Sally MAIRS (Photo credit should read LILLIAN SUWANRUMPHA/AFP via Getty Images)

Mu Sochua, the vice president of the banned opposition Cambodia National Rescue Party, says she has been released from detention at an airport in Malaysia.

Now in Kuala Lumpur, she told a Bloomberg reporter she plans to return to Cambodia by land despite fierce opposition from Prime Minister Hun Sen. The Cambodian leader, in power since 1985, has promised to “use weapons of all kinds” to stop a group led by top opposition figure Sam Rainsy from returning to Cambodia on Saturday, the country’s independence day.

Cambodia has sent troops to its border and called on neighboring countries to arrest exiled dissidents after accusing them of plotting a coup as the European Union reviews trade privileges that are essential to the economy.

Meanwhile Hun Sen’s administration has asked nearby countries in southeast Asia to block passage of the opponents, as he seeks to stop them from entering Cambodia.

Thai Prime Minister Prayuth Chan-Ocha ordered customs to deny Sam Rainsy’s entry due to Asean “rules.” On Thursday, he posted a picture of himself packing his bags as he prepared to board a plane from Paris to Bangkok, however Associated Press reported he was prevented from boarding the flight. Both Sam Rainsy and Mu Sochua have been in exile for four years.

The moves come shortly before Europe is expected to issue a decision on whether or not to pull Cambodia’s preferential tariff status due to its deteriorating human rights situation, a move that could devastate its economy. The EU is Cambodia’s largest trading partner, accounting for 45% of all exports in 2018.

This article was first published in Bloomberg. All contents and images are copyright to their respective owners and sources.