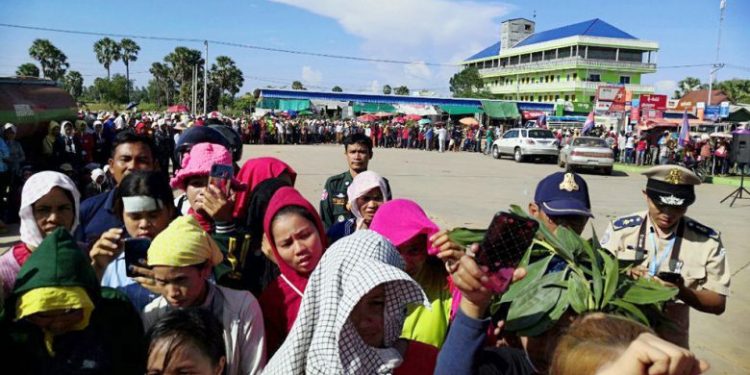 NGOs renewed their call to the government to resolve 11 concerns regarding gender-based violence at work and the protection of workers’ fundamental freedoms and rights.

In a joint statement released on Sunday, 21 local civil society organisations called on various government ministries and institutions to act in response to women’s needs. The call was a part of the 16-day Activism Against Gender-Based Violence campaign.

The NGOs said they had already petitioned the government twice – during International Women’s Day in March and International Labour Day in May – but the issues have remained unresolved.

Among the 11 points raised are the inclusion of nurseries in the workplace and community-based kindergarten facilities in every commune; a one-stop service centre for victims of domestic violence; implementation of the International Labour Organisation’s (ILO) Convention on Violence and Harassment at work; reforming the modes of transportation for workers in the textile, garment and footwear sectors; and having a minimum wage-setting mechanism to protect domestic workers.

“There have been several cases where local authorities have intervened only to encourage women to understand, tolerate and give another chance to the perpetrators, thus requiring women to change their attitude to avoid conflict, rather than bring the perpetrators to justice,” the NGOs statement said.

They also called for the government to provide social protection for street vendors; strengthen protection mechanisms for migrant workers; set a minimum wage and gratuities for workers in the tourism and construction sectors; strengthen the implementation of the law in relation to land disputes; and increase the respect, protection and promotion of trade union rights through amendments to the Law on Trade Unions.

The statement said that there were currently no mechanisms or systems for supervising the working conditions or health and safety of migrant workers, and there was no provision of social protection to domestic workers overseas.

“House owners deprive women domestic migrant workers of their right under the law to hold identification documents such as passports, as well as their right to communicate with people over the phone,” the statement said.

The president of the Cambodian Food and Service Workers Federation, Ou Tep Phallin, said on Monday that the petitions submitted by the NGOs have not been acted upon.

“There have been discussions about the Law on Trade Unions. But the comments from the unions had not been considered when making the amendments. So we see no positive response to all the problems that were raised,” she said.

She said the 11-point petition listed priority issues that should be dealt with to improve the country’s development and ensure that people live in comfort, and have security and safety.

The workforce, consisting of factory workers, street vendors, domestic workers, informal workers and farmers, are the veins of the country’s economy, she said.

“Development should also address investment in human capital. If workers feel comfortable and safe at work and are paid and protected then this will translate to effective economic development,” Tep Phallin said.

Several spokespersons for government institutions mentioned in the statement could not be reached for comment on Monday.