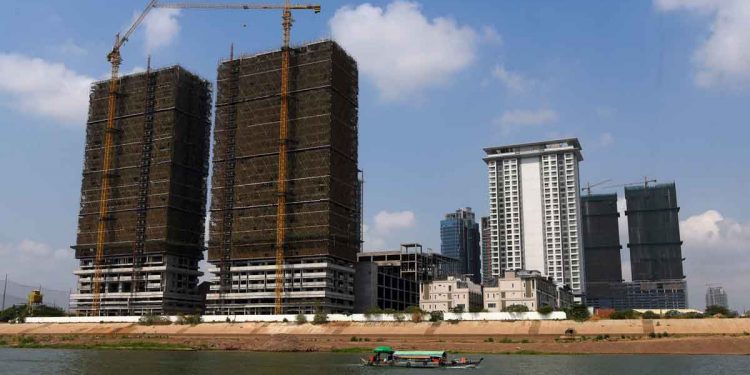 Investment in construction will have risen up to 78 percent by the end of the year against last year’s figure, according to the Ministry of Land and Management, Urban Planning and Construction.

That amounts to around $9.3 billion across the country.

The figures were revealed at the 8th Cambodia-International Construction Industry Expo 2019 yesterday at Koh Pich by Chea Sophara, Deputy Prime Minister and the Minister of Land.

He said most investment capital was being injected into Preah Sihanouk province.

Mr Sophara added: “The majority of the investment into Preah Sihanouk province is from China. The increase in the construction sector stems from the strong growth of the economy and political stability.”

According to the report from the Land Ministry, in the first 11 months of this year, investment capital in construction was $8.75 billion, accounting for a 67.44 percent rise compared with the same period last year.

More than 1,000 companies are registered and operating in the construction sector, of which 485 are foreign companies from China, South Korea, Japan, Thailand, Vietnam, Singapore, Malaysia, France, the US, the UK, Australia, Canada, Germany, and Spain, among other countries.

The World Bank’s latest report said Cambodia’s economy continues to show signs of robust growth, underpinned by solid export performance and strong domestic demand. The economy is projected to ease gradually in the short to medium term. Growth is expected to decelerate to 7 percent in 2019, down from 7.5 percent in 2018.

“The most rapid increase in construction activity has been in the provincial capital of Preah Sihanouk, which received $1 billion in investment for the entire 2018,” the World Bank said. “As a result, Sihanoukville is being transformed into an industrial boomtown with bustling investment, trade and tourism, an airport and the country’s largest seaport. An expressway linking it to the capital city of Phnom Penh is under construction.”

Pung Kheav Se, chairman of the Cambodia Constructors Association, agreed that the growth of the construction and real estate in Cambodia is still strong and demand in this sector is high, especially from foreign investors.

He said investments are being moved from the textile industry into real estate and residential projects. Mr Kheav Se added that the government has issued an effective policy to support the private sector and attract more foreign direct investment into Cambodia.

He said Cambodia’s land prices are low and construction materials are limited compared with China, Hong Kong and Singapore.

“We are still an attractive place to draw foreign investors to Cambodia so, if Cambodia has political stability and security, it will attract more and more investors.