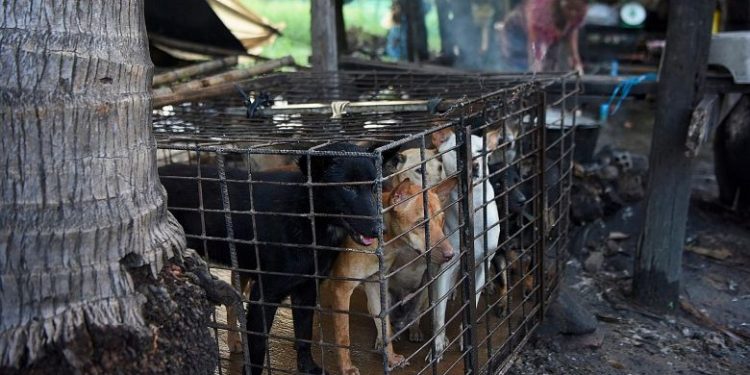 SIEM REAP • Cambodian dog meat traders drown or strangle thousands of canines a day in a shadowy but sprawling business that traumatises workers and exposes them to deadly health risks like rabies.

One dog meat restaurant owner, Mr Khieu Chan, burst into tears when describing a job that haunted him as he went to sleep: he would kill up to six dogs a day, slicing their throats.

“Please forgive me. If I do not kill you, I cannot feed my family,” the 41-year-old told 10 dogs awaiting their fate in a cage.

A cheap source of protein, dog meat is still eaten in several Asian countries from China and South Korea to Vietnam and non-Muslim communities in Indonesia.

Animal welfare activists say consumption has declined as the middle class has grown – more people own pets, and there is greater stigma associated with eating dogs.

But the brutal trade has flown under the radar in Cambodia, where new research shows a thriving business involving roving dog catchers, unlicensed slaughterhouses and many restaurants in cities selling so-called “special meat”.

About two million to three million dogs are slaughtered annually in Cambodia, said non-governmental organisation (NGO) Four Paws, which identified more than 100 dog meat restaurants in the capital Phnom Penh and about 20 in the temple town of Siem Reap. “It has this massive trade,” says Dr Katherine Polak, a Thailand-based veterinarian who works with the NGO, which recently presented findings to the government.

Officials were “shocked” by the magnitude, she claims.

Motorbike riders criss-cross northern Cambodia trading pots, pans and cookware for unwanted dogs, loading them into heavy rectangular cages on back seats and making deliveries to middlemen. Live specimens fetch US$2 to US$3 (S$2.70 to S$4) per kg, incentivising suppliers to collect as many dogs as possible.

Researchers say the dog meat trade is a public health crisis because it carries potentially infected animals all over the country.

Cambodia has one of the highest incidence rates of rabies and most cases are from dog bites.

Unsanitary slaughterhouses have no safety regulations as they are not overseen by the government, and workers wear no protective gear.

Industrial-scale slaughterhouses in developing countries put some distance between workers and animals. But the Cambodian dog trade is hands-on.

After receiving delivery, shirtless men poke dogs with sticks into holding cages. They are then hung, strangled with rope, clubbed over the head or drowned in a pit filled with fetid water.

Just after sunrise in a village in Siem Reap, one worker pulled a dog out of a cage and hung it on the branch of a tree near drying laundry. After gasping for breath for several minutes, it stopped moving. It was then placed in boiling water to remove its fur, and chopped up.

Suppliers can earn from US$750 to US$1,000 in a country where wages in garment factories are under US$200. Productivity is crucial.

Drowning is the preferred method of slaughter a few hours away in Kampong Cham and Kandal provinces. “By putting them in the cage and drowning them in a pit, we do not have to hear their cries,” says one woman.

Meat and parts are sold to restaurants, where they are popular with day labourers as a barbecued snack or a bowl of soup costing US$1.25.

The psychological trauma involved in bringing cheap meat to the table is immense and those who find a better job take it.

In an unconventional twist, after Agence France-Presse first spoke to Mr Khieu Chan, the NGO offered to provide him with land for farming if he would close his restaurant.

One recent afternoon, he helped the NGO gingerly take sickly dogs out of a cage placed under a tree.

But before they were removed and sent to Phnom Penh for treatment, he knelt by the bars to say goodbye. “Now you have freedom. You are spared from death.”

This article was first published in Straits Times. All contents and images are copyright to their respective owners and sources.