Cambodia cracks down on activists as opposition leader plans return 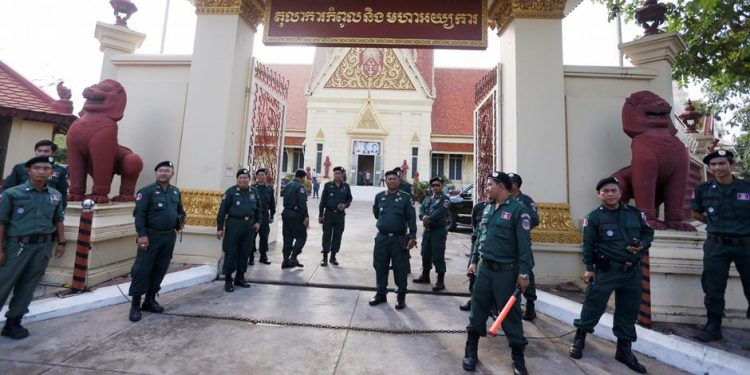 At least 30 opposition activists have been arrested this year and accused of plotting to overthrow the Cambodian government before the planned return from self-exile of Sam Rainsy, the main opposition leader.

Rong Chun has never been a man who is easily intimidated. Since the early 1990s, the labor activist and president of the Cambodian Confederation of Unions has been involved in a battle for democracy, human rights and fair wages. “I want equality. I want all Cambodian people to have democracy and respect human rights,” he says. “Should I stop because I’m scared? I use my right to say what I want to say.”

But for supporters of Cambodia’s main opposition party, the Cambodian National Rescue Party (CNRP), saying what they want to say has become increasingly dangerous in the past several weeks. Since CNRP leader Sam Rainsy announced that he would end his self-imposed exile and return to Cambodia on November 9, at least 30 opposition supporters have been arrested. Others have been called in by the police for questioning, are intimidated or have fled the country.

The Cambodian government accuses Rainsy, who has been living in exile for about four years, and his supporters of plotting a coup to topple the government of Prime Minister Hun Sen, who has been in power since 1985.

For over two decades, Rainsy has been Hun Sen’s main opponent. In the general elections in 2013, the CNRP, the party co-founded by Rainsy and Kem Sokha, came close to victory, when it won 55 of the 123 parliamentary seats. During commune elections in 2017, the opposition party repeated that result, when it won almost 44% of all the votes.

But later in 2017, the CNRP got into trouble when Sokha was arrested on charges of treason. The controversial case against Sokha — who now lives under de facto house arrest — was enough for the Supreme Court to dissolve the CNRP. Without the main opposition party contesting the elections, Hun Sen led his Cambodian People’s Party to an easy victory in the elections of 2018, winning every seat in the Parliament and turning Cambodia into a one-party state.

Rainsy says that he wants to come back to restore democracy. “I have decided to return to attempt to halt and reverse this embrace of authoritarianism,” he said in a recent statement. “I am convinced that the long-suffering and silenced Cambodian people will massively and peacefully rise to demand a democratic change that it can’t secure at the ballot box since the regime in place refuses to hold any real elections with opposition participation.”

Despite this statement, a coup is not the plan, says Rong Chun, who has been collaborating with Rainsy since 1993. “Saying he plans a coup is just an attempt to frame Rainsy,” the union leader says. “If the CNRP wanted a coup, they would have tried that after the elections of 2013 or after the killing of Kem Ley [a popular political commentator who was assassinated in July 2016]. But the CNRP didn’t do it, because it doesn’t want blood on the streets.”

Since 2017, the Cambodian authorities have not only attacked the opposition, but also independent media, critical NGOs and outspoken dissidents. Two journalists of Radio Free Asia are on trial because of espionage accusations, a number of government critics have fled into exile.

There are about 100 activists affiliated to the CNRP currently hiding in Thailand, DW correspondent Julian Küng reports from Bangkok. Some of them told DW that they had fled to avoid being arrested on the charge of planning a coup. They say they will return to Cambodia in November to meet Sam Rainsy.

But Sarath Mounh, a former provincial CNRP worker, sounds a cautionary note: “November 9th is our tentative date of returning. But what will actually happen is open.”

Rainsy had initially announced he would return in September, then postponed it to November. If Rainsy clings to his plan, more arrests are likely to follow. On Monday, Tea Banh, Cambodia’s defense minister, ordered “suppression” of CNRP supporters and to “take direct measures to prevent them from strengthening their cause and creating full-fledged chaos,” Radio Free Asia reported.

While the Cambodian government says that it’s defending peace and stability, many believe that the current crackdown is purely meant to scare Rainsy from coming back. “Someone is very insecure when they already have all the guns, but get spooked by a couple of dozen people thinking differently from the regime,” Sophal Ear, a Cambodia expert and associate professor of diplomacy and world affairs at the Occidental College in Los Angeles, told DW.

“What is behind all this is the Chinese proverb: ‘kill the chicken, scare the monkey.’ They think that intimidation of the few will scare the many.”

Believing that Rainsy is capable of restoring Cambodia’s democracy, union leader Rong Chun openly supports Rainsy’s plan to return. And even though he’s being regularly followed, monitored and intimidated, Rong says he has no fear of being arrested. “But I have to be calm and strategic. I’m a leader and need to look out for the people who follow me. I don’t want them to be in trouble because of me.”

Maybank2U to enable fund transfers between Malaysia and Cambodia