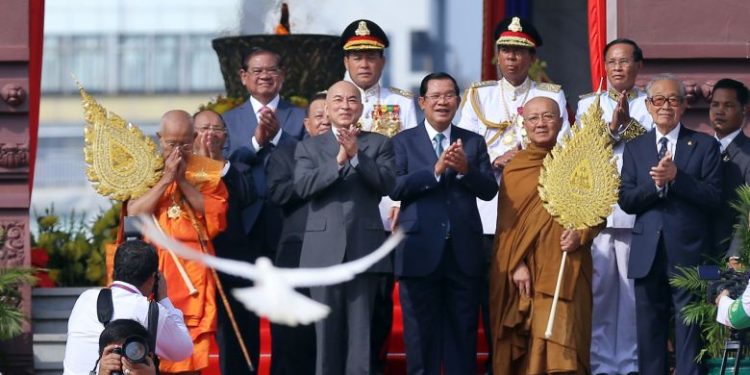 Cambodia on Saturday celebrated Independence Day to mark the end of French colonial rule under the leadership of King Father Norodom Sihanouk in 1953.

Thousands of people from all walks of life watched King Norodom Sihamoni light the victory flame at Independence Monument to mark the 66th anniversary of Cambodian autonomy on November 9.

King Norodom Sihamoni lit the flame to honour all those who devoted themselves to the independence movement.

“My people, you have to remember and be grateful for the great achievement of the King Father, and give the highest respects of the nation and the people of Cambodia,” King Sihamoni said.

Cambodia was under French rule for almost a century from 1865 to 1953.

Prime Minister Hun Sen, who attended the celebrations, said he and all government officials, units of the armed forces, students and the people followed King Sihamoni in commemorating Independence Day, which also marked the founding of the Royal Cambodian Armed Forces.

“November 9 is the most important day for Cambodia. It celebrates the historic day on which Cambodia gained independence from French colonial rule. Today, Cambodian people celebrate this day happily with pride for the nation.

“No one can interrupt the happiness and peace of Cambodia. I thank my compatriots who have joined me in protecting peace for our country so far,” Hun Sen said.

Countries including the US and China sent letters of congratulation.

The US said this year’s celebrations should focus attention on national reconciliation.

US President Donald Trump sent his regards in a letter to King Sihamoni and the Cambodian people.

“The US stands with the Cambodian people in their desire for a peaceful, prosperous, democratic and sovereign Kingdom,” Trump wrote.

US Secretary of State Mike Pompeo also congratulated the people of Cambodia on the occasion.

“In recognition of the values that Cambodians and Americans share, we hope this day will focus on national reconciliation, peaceful dialogue, and democratic, economic and social development.

“As much as social cohesion and trust are important for a nation, we believe that the friendship and support of friendly countries that have helped us throughout our difficult years are as important.

“Cambodia values the friendship of the US, and Pompeo’s message gives us a greater sense of renewed hope for deeper and more meaningful cooperation between Cambodia and the US, with mutual respect for each other’s independence and sovereignty,” Sokhonn wrote.