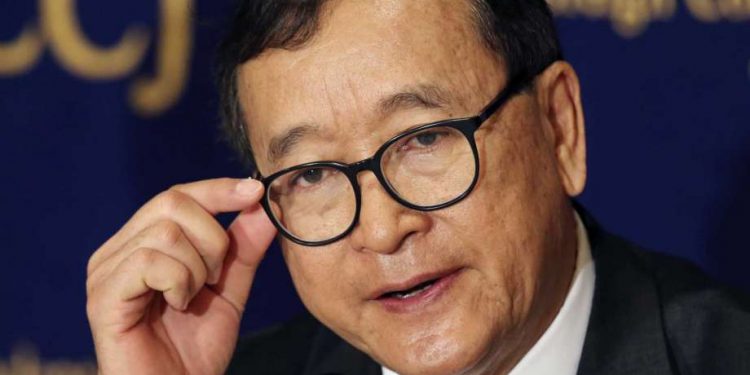 Several hundred members of Cambodia’s security forces staged a major exercise Friday in a show of force ahead of the promised return of exiled opposition leaders whom the government says are unwelcome.

The drills by army and police units in Banteay Meanchey province, which borders Thailand, were mainly to provide security for the public but also to defend against any “anarchic activity” that might be carried by the opposition Cambodia National Rescue Party, said Gen. Chhum Socheat, a spokesman for the Ministry of National Defense. The party was dissolved by a court order in 2017.

Party co-founder Sam Rainsy has declared that he and his colleagues will return to Cambodia on Nov. 9 — Independence Day — along with a mass of supporters. While Thailand has never been publicly specified, it is the only practical location for such a plan.

The government of Prime Minister Hun Sen has accused the opposition of seeking to overthrow him and said they will be arrested if they try to enter Cambodia. The authorities have threatened anyone supporting the opposition plan with arrest and long prison sentences. Dozens of people have been detained.

“I am prepared to sacrifice my freedom — and even my life — to give democracy a chance, to help ensure freedom for my unfortunate people,” Sam Rainsy said Friday on his Twitter account.

It is uncertain if he and his colleagues will be able to enter Thailand, whose government sometimes frowns on visitors who agitate for political change in its neighbors.

Sam Rainsy has been Hun Sen’s most prominent foe for decades. He went into exile in late 2015 to avoid a two-year prison sentence on charges of criminal defamation. Other legal cases have since been lodged against him by the government.

Other top party members fled into exile during a 2017 crackdown on all opposition to Hun Sen, which included the party’s dissolution, the shuttering of virtually all critical media and the arrest of the party’s other co-founder, Kem Sokha. He was charged with treason, based on his links to a U.S. pro-democracy organization, and is under strict house arrest.

The Cambodia National Rescue Party had been expected to mount a strong challenge in the July 2018 general election, and its dissolution was widely seen as being politically motivated, with Hun Sen’s ruling Cambodian People’s Party fearful that it could lose power.

Cambodia’s courts are widely seen as being under the influence of the government.