The Vietnamese Ambassador to Cambodia, Vu Quang Minh, has reaffirmed that Vietnam considers its neighbour an important development partner. 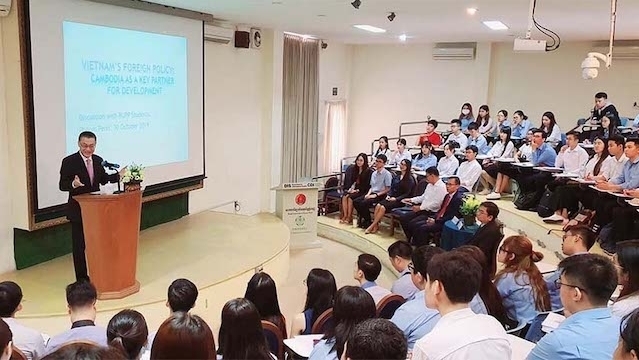 As reported by Nhan Dan Newspaper correspondents in Cambodia, the diplomat was speaking during a presentation on Vietnam’s foreign policy with over 100 students at the Royal University of Phnom Penh (RUPP) in Cambodia’s capital city on October 30.

Themed “Cambodia – a key development partner,” the presentation highlighted Vietnam’s goals and priorities in its foreign external activities with its neighbor Cambodia.

According to Minh, the Vietnam – Cambodia relations, which have been nurtured by leaders and people of the two countries over generations, have become valuable assets of both nations.

The two countries are determined to preserve and continuously develop this good bilateral relationship to new heights, based on political trust, equality, mutual benefits, respect and mutual support, the diplomat affirmed.

With that foreign policy, Vietnam advocates to expand multifaceted cooperation with other countries and territories on the basis principles of international law and the UN Charter, he said, adding that over the past years, Vietnam has actively negotiated and signed the framework of comprehensive friendship and cooperation for the 21st century with many countries both inside and outside the region.

During the presentation, the Vietnamese ambassador also answered questions from RUPP students on a number of topics, including the value of national culture in international integration, successful negotiation strategy for small countries like Vietnam and Cambodia, and measures to minimize the impact from the US-China trade tensions on the economies of both Cambodia and Vietnam.

The event was held after the Vietnamese Embassy welcomed more than 100 Cambodian students before leaving to study at Vietnamese universities under an agreement on education and training between the two Governments.

Carlsberg to buy out Cambrew brewery in Cambodia