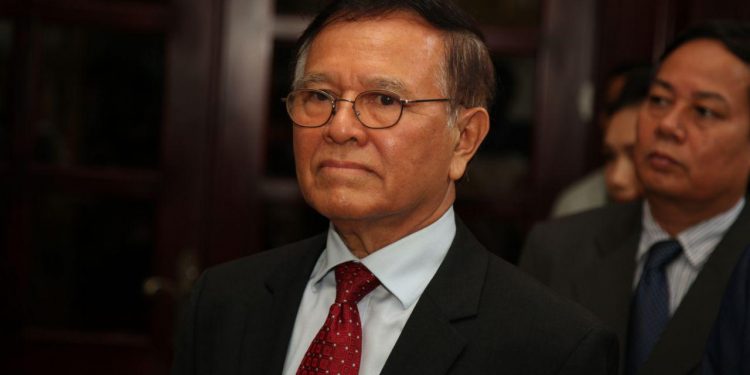 In response to the announcement that Kem Sokha, president of the banned opposition Cambodia National Rescue Party (CNRP), has been released from house arrest, Nicholas Bequelin, Amnesty International’s Regional Director for East and Southeast Asia, said:

“This minor reprieve for Kem Sokha cannot mask the ongoing, severe repression of human rights in Cambodia. Scores of innocent people remain jailed for peacefully exercising their rights and more than 100 have been charged for their affiliation with the CNRP since August.

“The international community should not be fooled by this token gesture by the Cambodian authorities. While it is welcome that Kem Sokha can now leave his home and seek medical attention, the charges against him must be dropped immediately, along with those against the dozens of political activists who have been arbitrarily detained and charged in recent months.”

“The international community should not be fooled by this token gesture by the Cambodian authorities. While it is welcome that Kem Sokha can now leave his home and seek medical attention, the charges against him must be dropped immediately, along with those against the dozens of political activists who have been arbitrarily detained and charged in recent months.

“The militarization of Cambodian cities and border provinces in response to the planned return of CNRP leaders, including Sam Rainsy and Mu Sochua, has shocked the world. The continuing violent threats against them and supporters of the CNRP underlines the fact that much more is required in order to end Cambodia’s human rights crisis.”

The Phnom Penh Municipal Court announced on 10 November that Kem Sokha’s bail conditions would be altered following a request by his lawyers on 7 November. Under his revised bail conditions, Kem Sokha is no longer restricted to his home but remains banned from engaging in any political activity and cannot leave Cambodia.

Kem Sokha, 66, is the President of the CNRP. He was arrested in a midnight raid on his home in Phnom Penh on 3 September 2017 and subsequently charged with “conspiring with a foreign power” – which carries a prison sentence of 15-30 years – under Article 443 of Cambodia’s Criminal Code.

Kem Sokha was initially refused bail and sent to pre-trial detention in the remote maximum-security Correctional Center 3 prison on the border with Viet Nam in Tbong Khmum province. He was released on bail and subject to restrictive conditions amounting to house arrest in September 2018.

The CNRP was dissolved by the Supreme Court in November 2017 based on a complaint filed by the Ministry of Interior, which accused the CNRP of seeking to stage an “illegal coup d’état.” The party was ultimately dissolved despite what was widely considered to be a lack of credible evidence to support the accusation. The Supreme Court further banned 118 of the CNRP’s most senior members from engaging in any political activity for five years.

A recent spate of intimidation, harassment, arrests and other threats against members of the CNRP has followed a pledge by acting CNRP President Sam Rainsy, who resides in France, to return to Cambodia. On Saturday 9 November he arrived in Malaysia, as part of his attempted return to Cambodia. The Cambodian authorities have labelled the planned return an attempted coup d’état and undertaken a heavy-handed crackdown against individuals affiliated with the CNRP.

Since August, when Sam Rainsy made this pledge, at least 57 former CNRP members have been jailed and 105 have been subject to politically motivated charges including “plotting against the state” and “attack” for allegedly supporting the return to Cambodia of CNRP leaders living abroad. Arrests have typically been conducted without due process and in the absence of arrest warrants.

This article was first published in Amnesty International. All contents and images are copyright to their respective owners and sources.